If you haven’t, you’re really missing out on a great opportunity. Some of the most unique photos I’ve ever taken were through spontaneous, wacky, and unconventional uses of my camera. Today I’m going to share a very different way to take a photo, a technique that I stumbled upon when my mind was in a state of play. Today, I’m going show you how to literally paint with light on your camera’s sensor (or film if you’re still into that) to produce some truly unique images.

For this shoot, I’d returned to the dock where I’d photographed the Rainbow Rocks over a year before, but this time I wanted to do something really different. With modern auto-focus and light metering, any cross-eyed orangutan can take a decent photo of a tree, and even a child can frame a photo pretty well these days. But it takes a slightly odd human being, such as myself, to do something a little crazy without being ashamed about it; and to be honest, I felt bored with the idea of taking photos in the conventional way. 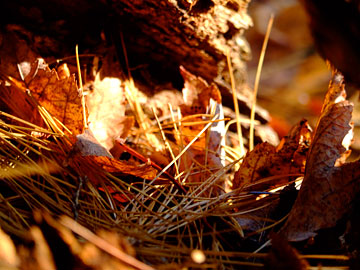 In the past, I’d taken advantage of everything I could think of, always aiming for an image that gives people a new perspective, or at least an image that they find pleasing. But this time I wanted to do Something Different™, and yes, something a little crazy. In the process, I inadvertently started painting with light, creating abstract and perspective-altering images by smearing the light as it hit the sensor.

So how did I do this?
And subsequently, what do I highly recommend you try?

How to Camera Dash 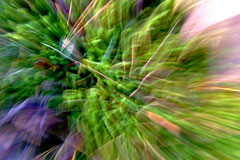 First, I increased my camera’s shutter length to 1/20th of a second and sometimes as long as 1/13th of a second depending on the light around me. How long your shutter length should be depends on your lighting situation, but if you’re not getting results, try increasing your shutter length. Secondly, holding tightly to my camera’s gripping area, I literally flung my arm around, and took a photo as the camera was moving quickly through the air. Timing is key. I tried a lot of different things, sometimes rotating the camera and sometimes diving the camera near the grass to get a warping effect. The photo to the right is a good example of a dive.

It’s important to point out that this technique is different from letting go of your camera and actually tossing it into the air. I do not recommend camera tossing at all! Camera tossing puts your camera at great risk of falling and breaking into a thousand shiny pieces. I’m not a fan of shattering expensive cameras, and I suspect you aren’t either.

Camera Dashing is Much Safer 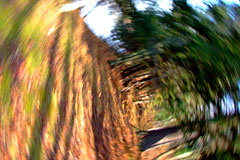 My technique, which could be called Camera Dashing, is much safer. The difference between this and camera tossing is that you maintain a strong grip on your camera as you make arcs, rotations, and dives through the air while pressing the shutter. (Keeping the camera wrist strap on is definitely recommended.) And although it takes some practice to get the timing right, you should also try quickly rotating your camera as you take the photo which can produce some interesting results. A good example of a rotation is the photo of the forest on the right.

I later found out that this is actually an example of Kinetic photography, which is photography composed wherein a specific effect is caused by motion. However, because you never let go of your camera when doing this technique, Camera Dashing is the safest form of Kinetic photography that I know of. As long as you know your own strength, the risk is minimal!

If you have any questions, please don’t hesitate to ask them in the comments. This doesn’t take long to get the hang of, and it produces some very interesting results.

So what are you waiting for? Get out there and paint with light!

And most of all, have fun!

Photos from this trip are in the Camera Dashing in the Abstract Forest album. All photos in the Gallery can be used as desktop wallpapers because they are high resolution (1920×1440).

Photo: Seeing Partial Solar Eclipse with Pinhole Camera made of paper plates
Chicago Museum of Contemporary Art Doesn’t Like Your Camera. Why?
Free Up your Conscious Mind for Photography
Photo: Bearded Dragon smiling for camera
Adventures in Lilac

2 bits on Why Camera Dashing is Superior to Camera Tossing