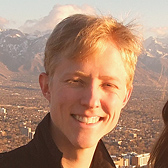 Welcome to Andrew Crusoe’s wonderfully-weird corner of the internet, aka. MYTH.LI, where he shares the odd creations of his brain and heart, beaming into your eye holes directly from the Big Island of Hawaii! 🌺

Andrew is an author, podcaster, speaker, cyclist, and occasionally even does stand-up comedy. His first Tropical Sci-Fi novel, The Truth Beyond the Sky, gained attention for successfully predicting gravity waves, years before they were proven by LIGO in 2016.

It’s the first in a mind-bending Sci-Fi trilogy that draws inspiration from the Big Island of Hawaii, the Ra Material, and Robert Monroe’s out-of-body-experience series. Plus, the sequel is the only Sci-Fi novel that features Hawaii’s famous, volcanic Ahalanui Warm Ponds woven directly into the plot; and it’s written so you could even begin reading there.

His new series, Ten Thousand Hours in Paradise, is an addictive, true story of what happened when he flew from Wisconsin to the Big Island of Hawaii: a story of love, a lava lake, an encounter with “a kahuna who kahunas”, a pledge of noble silence, a hurricane, and a consciousness shift that changed his life forever. Learn more → In addition to Andrew’s interview podcast Aravinda Show (which you should totally check out), Andrew and his books have been featured in many podcasts. Below is an updated list that will continue to grow: