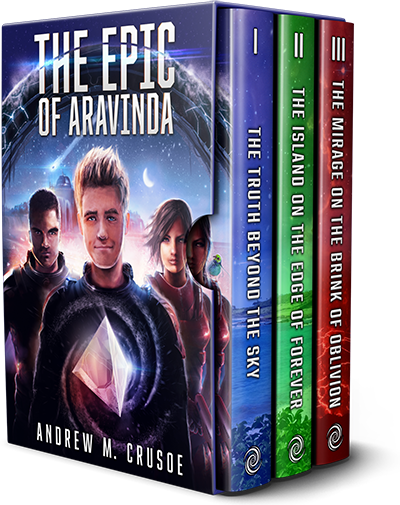 At last, you can get the entire trilogy in one ebook, including EXCLUSIVE concept art of 4 main characters you can’t get anywhere else.

On the 12th anniversary of his mother’s disappearance, Zahn hikes to the island summit, only to be awoken by a brilliant object thundering down from the sky, impacting into the beach far below. In a frenzy, he sprints down the mountain, coming across a large crater in the silvery sand. He reaches in, pulling out a triangular plate made of a strange material, moonlight sliding off of it at strange angles. Conflicted over what to do, Zahn hides the fragment in his room for days.

Action-packed, with a scope as ambitious as Star Wars, THE TRUTH BEYOND THE SKY will leave you energized and hungry for more. And the adventure continues with, The Island on the Edge of Forever:

When Asha accepts a mission to recover a sacred stone capable of raising the dead, she doesn’t expect her ship to be shot down above a raw, untamed world.

To their shock, Asha and her commander Mira are dragged into the planet’s wild ocean, and Asha barely manages to escape a vast underwater complex. Once she reaches the surface, she discovers a mysterious island that comes to life with dancing villagers and roaring bonfires every night, only to vanish without a trace each morning, leaving her feeling alone and confused.

Meanwhile, Zahn has taken Oonak’s ship on a mission to a subterranean labyrinth where Vayuna says he will be needed, learning more about the Vakragha than he ever could have imagined. Yet there are greater struggles ahead for both of them. Having followed Asha, the vicious Vakragha are desperate to find the stone first, bent on using it to revive their greatest mastermind. Time is running out, and Asha must rely on her courage, intuition, and healing skills to have any hope of survival. But she soon discovers that the Vakragha aren’t the only ones searching desperately for the sacred stone….

And the adventure continues with The Mirage on the Brink of Oblivion:

What if you could hold a memory in the palm of your hand?

In the Mirage, you can. Within the out-of-body state, the Mirage allows everyone to trade memories like souvenirs and create structures that defy physics. And now, after centuries, even the memory of the devastating Vakragha attack on their world has all but been forgotten, and most have lost touch with the physical world altogether.

Jyana is different. Driven by her desire to understand the natural world, she dedicates herself to studying the sea below Mirage City. Yet when she finds that the coral reef is being destroyed, no one will take her seriously, not even Torin, whom she loves more than anyone. But Torin has other things on his mind. The colossal structures of the Mirage demand a regular supply of ambrosia, but the shortages are getting worse.

In the midst of this confusion, everyone is shocked when a refugee from before the attack returns. Filled with questions, Asha has come with a secret mission which could destabilize the entire planet, causing the end of the Mirage itself.

Get the whole box set on: