A few weeks ago, I took a walk down to a boat landing I haven’t photographed before, and although I went down there without any real plan, I ended up learning a lot more about the nuances of how my camera lens works.

When I arrived, I decided to experiment with a shallow depth of field, which, if you don’t know, is an effect created by the camera when only objects a certain distance away are in focus and everything nearer or farther than that distance is blurred in varying degrees. A good example of this is the Mossy Log Squirms out of Focus photo.

Zoom to get a shallow Depth of Field

I had known for years that a wide aperture, something like 2.8f, is necessary to get a shallow depth of field, but I’d never specifically tried to blur out the background with my FujiFilm S6000fd before. (Which in the year since I’ve bought it has been replaced by a much-improved model. Such are the ways of technology.) 😉 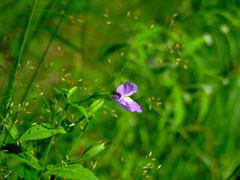 When I first tried creating a shallow depth of field the camera lens was just too good at keeping everything in focus! Hmm. So I tried twisting the manual zoom just a bit and sure enough that shortened the depth of field enough to be noticeable. By zooming in just a bit and manually focusing on the intended object, I was able to isolate any object I wanted, such as in the violet flower pictures.

If the color in these photos seems richer than previous excursions it’s because I also experimented with the color processor and had it set to Chroma for most of the day, which produces richer color than normal. In some situations, such as indoor situations, this can create an unrealistic effect, but outside it actually heightens the realism. I encourage you to try it out in your own camera and see if you like the results. Many cameras have a heightened color setting, sometimes called Chroma, usually next to the black and white setting. Just be careful to avoid having your pictures look too saturated like cartoons. Contrary to what you may believe, Daffy is not in your backyard waiting to be photographed. 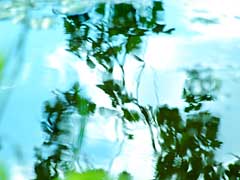 Once I had the basic technique down, I began to really play around and have fun with the lens. As I get more experience in photography, I realize more and more that the key to capturing the essence of life is being spontaneous and playful. Once you no longer have to think about the camera’s functions consciously, it frees up your conscious mind to work really quickly and intuitively, and sometimes you don’t even remember taking certain pictures. For instance, I can’t remember what I was thinking when I took Nostalgic Summer Reflections (on the right), but it captured the essence of that day’s walk — and it’s one of my favorite of the bunch. Not to mention it makes a dream-like desktop wallpaper.

What about you? Does your camera require you to zoom a bit before you can achieve a shallow depth of field?

Have you freed up your conscious mind to be spontaneous lately?

Photos from this trip are in this album. All photos in Byteful Photos can be used as desktop wallpapers because they are high resolution (1920×1440) just as the fullscreen & widescreen wallpapers are.

3 bits on Free Up your Conscious Mind for Photography