On a spur-of-the-moment decision, I went outside to photograph the moon a few weeks ago. Alas the low temperature of the air prevented me from taking as many pictures as I would have liked.

The 10x optical zoom on my FujiFilm Finepix s6000FD came in handy, though, revealing many of the moon’s surface features. At first I thought it was even capable of beholding Mars, but the zoom magnification power proved too weak. In order to photograph the small red dot, the camera had to be slightly out of focus. At least I was able to capture the dot of Mars. (I’ll take what I can get.) 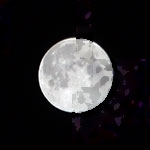 A few things I learned about night astronomical photography:

Amazing what one can find in the tiny details of nature.

Photos from this trip are in this album. All photos in Byteful Photos can be used as desktop wallpapers because they are high resolution (1920×1440) just as the fullscreen & widescreen wallpapers are.