As I occasionally do, I took a walk down to the nearby dam a couple weeks ago. Imagine my surprise when I beheld a large network of islands and peninsulas instead of a solid body of water. The summer was dry, indeed.

I moved down the rocks in what ought to be described as a galavanting move. The water had been low before, but never this low. I had never seen the water green, either. Rather predictably, I began walking around the new peninsulas, snapping photos of the scene: the strange algae-filled water, the limitless bird footprints in the sand, and the odd new land forms arising out of the reservoir bed.

Being Strange with Perspective

As is my habit when holding a camera, I looked for perspectives (camera angles) that no sane person would attempt. As a result, I’m rather happy with some of the more unconventional photos I took that day, including a one from a bug’s eye view. Other strangities include a group of jagged rocks that looked out of place among the abounding smooth sand of the reservoir bed. I wondered how they formed there, and I’ll probably never know. 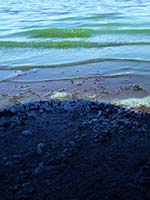 Not long after a noticed the jagged killer-rocks, a Monarch butterfly appeared out of what seemed thin air. Think of my excitement! Never before had an opportunity to photograph a Monarch butterfly been so thrust upon me. And it was at this time when I learned how fast Monarchs can go if they feel threatened. Imagine myself, chasing the erratic flight of what was probably the fastest Monarch butterfly in the county with a camera around a network of sandy peninsulas on a warm Saturday morning. Behold my life.

Indeed, it proved difficult to capture the beast on camera, and after about 5 minutes of shooting, my battery gave up and died. Once again I had to learn the timeless battery lesson: Always always always leave with fresh batteries. However, I did manage to capture a few decent photos of the butterfly before my batteries went kaput.

Of course, this walk contained parallels to real life lessons. Of course, everyone will get something different out of this story, but I can see the following parallels:

Goes to show you can’t predict what you’ll find in life, even standing in a reservoir.

Perhaps especially standing in a reservoir.

Photos from this trip are in Byteful Photos. All photos can be used as widescreen desktop wallpapers because they are high resolution (1920×1440).