Exploring territory as you travel around the world is not unlike exploring concepts within art. Both are a reflection of you and your biases. Indeed, you are the captain of your life whether you realize it or not. Today I’d like to tell you a story of how I charted some new artistic territory personally, and what you may learn as a result.

A long time ago in a galaxy far far away (and about two months before the creation of this website), I received a truly remarkable gift: a Wacom Intuos3 Tablet. Being inexperienced with tablets in general, I simply plugged it in and did what anyone ought to do when they get a new toy piece of equipment: I started playing around.

Most Natural Way to Learn

If you’ve been reading this site for a while, you’ve probably noticed that I often play around to discover how things work. Diving right into something new is usually the quickest way to figure out what you like about it and what you don’t like about it. Think of a child. Learning from direct, hands-on experience is the first way we learn how to use things, and it’s also the most natural way to learn.

The magic of the tablet is that a tablet provides computer input that most closely mimics the act of creating traditional art. By receiving a tablet, I had been given a tool to explore art in a new way; and like giving a machete to a hiker, I was now able to explore new artistic territory.

In my playing around, I created a strange, vortex-like composition with a bright dot in the center. After completing the digital painting to some satisfaction, I filed it away and promptly forgot about it for an entire year, literally. And then last year, like a painter rummaging through dusty drawers filled with old work, I came across some past Photoshop creations. (Incidentally, around the same time I also rediscovered “Wacom Painting 2” which later became Liquid Lazuli.) I opened up this, my first digital painting, and realized I never released it because I didn’t like the color composition at the time. The form itself was fine, but the color didn’t feel right to me; so now, a year later, I began experimenting with a hue adjustment layer until I got a more pleasing result. Then, 2 months ago as I was I began cleaning out my desktop wallpapers, I put “Wacom Painting 1” in the queue.

The Importance of a Good Name

Unlike Liquid Lazuli, I didn’t use a thesaurus to name this painting. Instead, I gazed at it until I pinpointed how it made me feel. This wallpaper features blue almost exclusively. I briefly thought of naming it something according to its color, but since that has been done so much before, I avoided this route. Too many artists create a good piece of art and then have a brainfart when it comes to naming their work. Never underestimate the importance of a good name because that’s how people will relate to your work in conversation. A name can either make or break your work’s ability to spread through word of mouth. (Seemingly unrelated: If you want to accuse me of being in an artistic blue phase, go right ahead.) 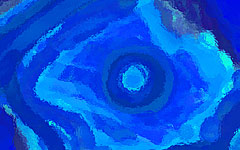 After ogling at the digital painting for a good 30 seconds, I realized that, predictably, it did make me think of water, but it also had a chilling effect — like ice. I imagined that this could be an abstract interpretation of an underwater tunnel heading down below icy fragments into mysteries below.

I christened it: Water for Ice. As always, it’s available in the byteful gallery at widescreen sizes.

Be A Mind At Play

By playing around and experimenting with a new tool, I was able to explore new artistic territory. Whether it be emotional, artistic, or geographical, I encourage you to ask yourself this question:

What new territory have I explored lately?

If you don’t know how to answer this question, perhaps it’s time you explore new areas of life. Be a mind at play. After all, exposing yourself to new experiences is the easiest way to become a more intelligent human being. 🙂

3 bits on New Widescreen Wallpaper & Be A Mind At Play