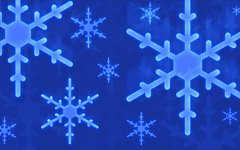 Probably the first thing you’ll notice about this year’s version is the new color. For the first time I’ve created two Indigo variations: Indigo Aglow and Indigo Deep. I stumbled upon this color scheme while experimenting with different hue and saturation adjustments in Photoshop, and now I prefer the Indigo versions above anything that has come before them. Who knows, perhaps next year I’ll take the next step down the color spectrum and create a violet version. (If you’d like a violet version, please let me know in the comments. I’ve been known to respond to demand.)

The second major modification I’ve made is the addition of the illusion of motion by blurring the six snow flakes in the foreground. This subtle effect took much trial and error to achieve in a pleasing way, but the result was worth it. And this brings me to something I learned this time around… 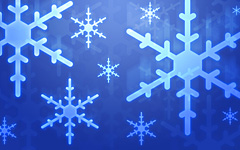 Creating this year’s wallpaper took hours of perfecting and was a good lesson in how to be patient when confronted with tedium and false-endings. A false ending is when you think you’re done with a task only to realize that there’s a minor problem that will bother you ad infinitum until you fix it. For instance, first the motion blur wasn’t blurred enough, then the color wasn’t quite right, then the snow flakes’ positions weren’t pleasing… you get the idea.

Sometimes a certain level of tedium is required to produce something worthwhile—in fact I’d say there’s a level of tedium in every worthwhile task. In many aspects of life, this tedium can be reduced or even eliminated, but in artistic creation, the tedium of experimenting with variations, such as in hue and placement, is necessary in discovering something new. What separates a good artist from a great artist is the ability to have persistence in the face of tedium.

I hope Snowy Sight 2009, available in widescreen sizes, helps get you into a holiday spirit and ring in the new year. Until next time, Merry Christmas, Happy Christmahanaquanza, and have a wonderful Festivus.