You can read about how huge it is. You can see photos of it on the internet. You can photograph it from street level.

But until you actually step out of the elevator on the 103rd floor, you have no real appreciation of the architectural feat that is the Sears Tower. 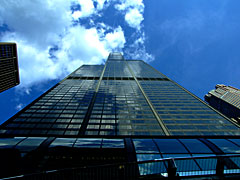 I’m not sure you can be fully prepared to witness the view that awaits you at the 103rd floor. I wasn’t, and as you’ll see, I was very lucky: it was a very clear day.

After waiting in line and watching a short film about the tower in their small theater, I finally stepped into what should only be described as a super-elevator. Any elevator that goes up to the 103rd floor in just a couple minutes deserves some respect — or at least a cool name. And only when I stepped out onto the Sears Tower Skydeck to see the view from 412 meters up (1353 feet) could I fully appreciate the Sears Tower for what it is: a view like no other.

To extract the most awesomeness out of your Sears Tower experience, there are 7 things you should know before you go:

All kinds of info about hours, directions, parking, and many other details are available on the official (though somewhat basic) Sears Tower Skydeck site.

Are You asking for a Challenge?!

Whatever you do, promise me you’ll push yourself to be a little more adventurous on your next trip than your last. Pushing your own, self-imposed, limits results in a more enjoyable trip, and you’ll be glad you did. Travelling, when done right, spurs big time growth.

More photos from this trip are in the Sears Tower – Chicago album.

Coit Tower Review: A Magnificent View from this Historical San Francisco Landmark
A Visit to crooked Lombard Street & The Pedestrians Who Wanted to Die
Lan Su Chinese Garden Review: A Visit that Transcends Portland Itself
Seen The Bean? (Chicago Cloud Gate)
7 Surprises from my Googleplex Visit: A Self-Guided Tour of Google HQ

4 bits on 7 Things to Know Before You Visit Sears Tower (or Willis Tower, whatever)