That’s what Frank Sinatra had to say about Chicago, but don’t let the song deceive you. There may not actually be a higher incidence of smiles here, Chicago is a town of many delights and a rich history.

Over 100 years before I was born, Chicago was founded near a portage between the Great Lakes and the Mississippi River watershed. In 1837, Chicago incorporated as a city and soon became a major transportation hub in North America as well as the transportation, financial, and industrial center of the Midwest United States. Today, the city attracts 44.2 million visitors annually. 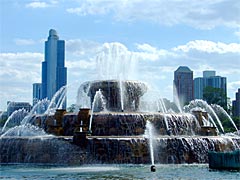 About 171 years after the city incorporated, I set foot into Chicago for the first time. Quite appropriately, the first place I visited was Grant Park, and in retrospect I can’t think of a better place to begin since it’s frequently referred to as the city’s front yard. What better place to start than the front yard?

As I walked into Grant Park, I saw a huge fountain in the distance, and I could also hear the sound of jets flying overhead. Near the fountain, someone was selling T-shirts to raise money for a fountain restoration project. He told me that this was Buckingham Fountain, one of the most popular landmarks of the city. Although the fountain was showing some wear, it was still quite beautiful. Little did I know that in a few hours hence, I would be seeing it from the tallest office building in North America.

Later, I found out that Buckingham Fountain, first opened in 1927, is actually one of the largest fountains in the world and is composed of Georgia pink marble. And I’m glad I arrived when I did, because just a few weeks after my visit, Buckingham Fountain closed for renovation and restoration of its deteriorated infrastructure. It’s nice to see that Chicago takes good care of its city monuments. 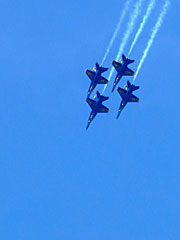 After snapping a few carefully composed photos of the fountain, I crossed the street to find the legendary Cloud Gate sculpture, otherwise known as “The Bean” of Chicago. I allowed myself to wander and, with a little help from some kind Chicagoans, soon found Millennium Park — all the while hearing the sound of jets in the distance. As I was exploring the park, I stopped at the Jay Pritzker Pavilion, Millennium Park’s outdoor performing arts venue. Although no one was performing at the time, people seemed to be enjoying themselves on the pavilion’s vast green lawn.

Suddenly, I finally saw the source of the sound that I’d been hearing all this time as the US Navy’s Blue Angels soared high in the sky overhead. Someone had told me that the annual Chicago Air and Water show was today, so I felt like I arrived in Chicago just in time. My 10X optical zoom came in handy when all four FA-18 Hornets took a steep nosedive while maintaining a diamond formation. I was lucky; the weather was clear and the visibility was excellent. The Blue Angels even left a vertical loop of contrail in the sky before disappearing behind some clouds.

Seeing the Cloud Gate (aka The Bean) 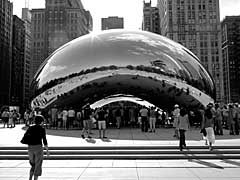 Once the Blue Angels disappeared, I continued looking around for the famed Bean sculpture. Although it’s 33 feet tall and weighs 110 short tons (nearly 100,000 Kg!), it’s actually surprisingly easy to miss, and I’ve talked to people who have visited Chicago before and never even heard of The Bean, which is a shame. Once again I relied on the kindness of Chicagoans and was soon pointed in the right direction.

And lo, the Great Cloud Gate of Chicago was soon before me — a huge, polished steel sculpture, warping and bending light all around it. The sun was glaring off its perfectly polished surface, and the light of the clear blue sky was perfect for photography.

The Cloud Gate, more commonly referred to as “The Bean”, is the most visited structure in Chicago, and for good reason: it’s huge, it’s interactive, and it’s beautiful. The Bean is almost like a toy, but instead of you playing with it, it plays with light. Perhaps Kapoor, the creator of Cloud Gate, said it best:

“What I wanted to do in Millennium Park is make something that would engage the Chicago skyline… so that one will see the clouds kind of floating in, with those very tall buildings reflected in the work. And then, since it is in the form of a gate, the participant, the viewer, will be able to enter into this very deep chamber that does, in a way, the same thing to one’s reflection as the exterior of the piece is doing to the reflection of the city around.”

If you’re going to visit Chicago, please don’t miss opportunity to play with The Bean. Just imagine how fascinated your friends will be when you bring back pictures of this incredible sculpture.

Photos from this trip are in the Grant Park – Chicago album. All photos in the Byteful Gallery can be used as desktop wallpapers because they are high resolution (1920×1440) just as the fullscreen & widescreen wallpapers are.

Chicago’s Crown Fountain (by Jaume Plensa) brings together Children of All Skin Tones
Photo: Quantum Cloud VIII by Antony Gormley in SF MOMA
Is Navy Pier a glorified shopping mall?
Golden Gate Bridge Review: How missing your bus can have a Silver Lining
Chicago Museum of Contemporary Art Doesn’t Like Your Camera. Why?