In downtown Chicago’s Millennium Park, just a short walk west from The Bean (Cloud Gate) structure, there is a truly marvelous fountain.

I had just returned from Navy Pier and was looking forward to something a bit more exciting and enjoyable than what I’d just seen, and thankfully this is exactly what I found. I’d heard vague mentionings of “a fountain with faces” days before, but this fountain turned out to be much bigger than I expected. When I arrived at the Crown Fountain, I was greeted by two 15 meter tall glass brick towers with a long reflecting pool between them. These were not ordinary towers, however. They glowed, they smiled, and they spouted water.

A Fountain that Unites the People

Dozens of children were playing in the fountain. In fact, the Crown Fountain brought together people of all skin colors, and seeing a rainbow of skin colors was a rather beautiful sight, (even though the blue people didn’t show up… again). 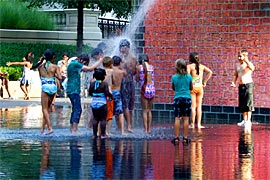 Just 50 years ago, it would have been taboo for these children, whose ancestors came from different continents, to play together without a second thought as they were on that day. I’m exceedingly pleased to see that race continues to be less and less problematic in the 21st century.

The Crown Fountain was designed by Catalan artist Jaume Plensa. It works by using panels of light-emitting diodes to display digital video of Chicago Residents. The Crown family, who donated most of the $17 million to build the fountain, were especially proactive in the fountain’s construction. They acted independently of Millennium Park officials and conducted independent research of water technologies, held their own design contest, and continued to participate during the construction phase of the fountain.

Out of three finalists, Jaume Plensa won the commission to design the fountain, and I’m sure the kids are glad he did. While Maya Lin’s horizontal fountain design was probably excellent, and Robert Venturi’s 46 meter tall fountain design was monumental — neither of these ideas had the potential for as much interaction, accessibility, and pure fun of Plensa’s interactive video fountain.

After observing the fountain for some time, I felt the need to explore the city further and started heading north. As I’ve mentioned before, wandering is a valuable tool in the traveller’s arsenal because it allows spontaneity to enter into the trip and always produces surprises. Like a pigeon snacking on Doritos, for instance. 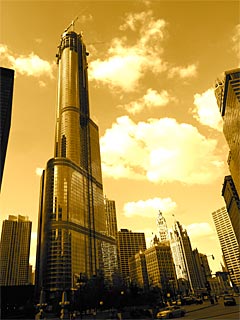 Coincidentally, I ended up walking near the Trump Tower, which was still in construction, and this gave me an excellent opportunity to make a decent photograph of the building. When I post-processed my photos of the day, I was delighted to see that the photo works quite well in a sepia tone.

In my exploration of the northern parts of downtown Chicago, I also came across a service of some nostalgia: a horse coach service. Drinking troughs for the horses were even built above the sidewalk (with an attached drinking fountain for humans, of course). Seeing horses and cars together on the same road seemed slightly absurd — yet logical at the same time.

Soon after, I found myself on East Chestnut Street again and took that opportunity to photograph the John Hancock Center towering above me. Though the photo looks as though I may have composed it deliberately, I assure you its visual balance is completely accidental. 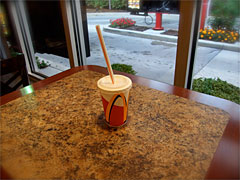 By this time, I began to get thirsty and remembered there was a McDonald’s nearby. I’m not a fan of McDonald’s “food” at all, so I walked in and ordered the only healthy item on the menu: water. I even took a picture of it, though I may have been suffering from dehydration-induced delirium. 😉

How Powerful is Wandering?

Overall, Monday the 18th turned out to be an excellent time to get my bearings and provided a useful mental map that I used for the rest of my time in Chicago. Turns out that wandering is also a good way to learn a new area. Could the mere practice of wandering be the mind’s natural way to create a mental map of a new place?

Photos from this trip are in the Crown Fountain – Chicago album. All photos in the Byteful Gallery can be used as widescreen desktop wallpapers because they are high resolution (1920×1440).