The city of Chicago is full of wonders and gems for the curious traveller to discover. While I was there, I wanted to be smart about how I spent my time. I only had a week, but by doing a bit of planning and intelligently managing my time I was able to visit:

…as well as check out great places to eat like the Pick Me Up cafe. Clearly, I was rather busy during my week in Chicago, but it was a good kind of busy — the exhilarated kind of busy. Some of these I’ve already written about, and others I will write about in the future. Today I’m going to talk about my third day.

On the third day I was in Chicago, I started by walking over to Wrigley Field which was nearby. For those of you who may not be familiar with that strange phenomenon known as American Baseball, Wrigley Field is the home to the Chicago Cubs. At the time (Autumn 2008), it was 92 years old, making it the second oldest active major league ballpark (after Fenway Park in Boston which is 4 years older). The stadium may have been older than 99% of the population of Chicago, but the shiny red, white, and blue Chicago Cubs logo on the side of the stadium looked brand new. I took a photo of it for all the Cubs fans out there. Perhaps it will come in handy as a desktop wallpaper.

After finding out I couldn’t actually go inside to look around without getting a ticket to the ball game that night, I decided to move on; but not before taking a picture of the Ernie Banks statue nearby. From what I hear, Ernie loved baseball like it was going out of style and was known for his catch phrase of, “It’s a beautiful day for a ball game… Let’s play two!”

According to the wiki, in 1955 he set the record for grand slams in a single season with five, and that record stood for over 30 years. Not bad. Even today he holds the record for most extra base hits by a Cub with a whopping 1,009 hits. Ernie is living proof that if you truly love something, you’ll persist at it.

When is a Yacht notta Yacht?

If you haven’t been to Chicago before, you may not know about Chicago’s excellent elevated train and subway system, simply referred to as the “L”, that serves as Chicago’s main form of public transportation. I took the L as close as I could to the pier, but the closest station was still some ways off.

I started walking east to Lake Shore Drive where the lake shore used to begin before humans drastically altered the landscape. When I reached the lake, I noticed a vast array of yachts and sailboats parked on the water. Some cargo ships were docked, as well. One of these cargo ships was called Abegweit, though ironically still read “yacht” near its top, and I wondered how big a ship had to be before it couldn’t be called a yacht anymore. Calling this huge ship a yacht seemed a little silly.

Better to Be A Pirate than to Join the Navy Pier

When I finally arrived at Navy Pier, I was surprised at how huge it was. It reminded me more of a small city than a pier. Unfortunately, Navy Pier turned out to be not much more than a glorified shopping mall, complete with restaurants and souvenir shops. The Children’s Museum sounded interesting, but unfortunately it was not a museum discussing the mysterious origin and meaning of children — it was more like a children’s playground. 😉

Navy Pier started to seem less and less interesting until I found a rather charming indoor park area, complete with palms and jumping water fountains like those found in Disneyland. The entire ceiling was glass, and this let in a wonderful amount of light and created a relaxifying atmosphere. 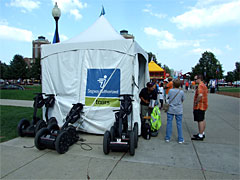 Not having the money nor the desire to take a Segway tour of the pier, I left and started walking north. I decided to explore the nearby Milton L. Olive III park. (Side-note: You’d hope that they would name a park after someone with a catchier name, but apparently this was the best they could come up with.) The park was not an excitement-explosion either since the fountains were completely drained and lifeless.

The nearby lookout point was not lifeless, however, and I was very lucky to walk by just as a group of tour bikes arrived. The tour guide had some interesting things to say, but nothing very memorable. Still, it was nice to have a quick chat with some fellow travellers. 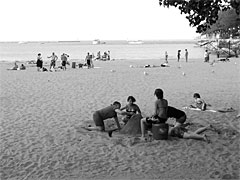 The patch of possibly purchased piles of sand formed a nice beach nearby, and some people in the shade were creating what looked like Devil’s Tower out of sand. Somehow, Close Encounters of the 3rd Kind seems to rear its head whenever I visit a beach.

As purely an attraction, Navy Pier wasn’t my cup of tea, but from an architectural standpoint, it’s an amazing engineering feat and not a bad place to eat lunch either. I wouldn’t place it in my top 5 favorite places to visit in Chicago, but if you have an extra afternoon, you may want to check it out.

The Future of Navy Pier

In the future, my feelings could change. In 2006, plans were released for a major renovation of the pier which would include a monorail, spokeless Ferris Wheel, a roller coaster, floating hotel, and a water park with a Great Lakes theme. Perhaps there’s hope for this pier yet.

Photos from this trip are in the Navy Pier album. All photos in the Byteful Gallery can be used as widescreen desktop wallpapers because they are high resolution (1920×1440).

Tenney Park and Lock Review: The Scenic Secret of Madison’s Isthmus
Exploring Pier 39, Chinatown, & My Own Personal Parade in San Francisco, CA
Chicago’s Crown Fountain (by Jaume Plensa) brings together Children of All Skin Tones
Seen The Bean? (Chicago Cloud Gate)
Why to visit Madison’s Tenney Park in the Winter (A Photo Essay)

9 bits on Is Navy Pier a glorified shopping mall?