In August, I took a sojourn down to Madison and then to Chicago. I’m not going to publish this trip as a series per se, but I am going to highlight some of the interesting places I explored during my time in both cities.

I’m going to start of with Tenney Park because it’s the first interesting new place I visited on this, my fourth trip to Madison. Or was it fifth? In any case, every time I visit Madison it shows me a different side of itself. I never thought a city of under a quarter of a million would have an unpredictable dynamic quality that is usually only reserved for cities in the millions.

As parks go, Tenney Park is a hidden gem, and it lies on the northern part of the Madison isthmus. (And if you didn’t know, an isthmus is a land bridge between two bodies of water.) The park features some excellent boating opportunities, but most of the park encompasses the land around the pond and Tenney Lock. According to a plaque I found nearby, the Tenney Lock connects Lake Mendota and Lake Monona which allows boats to travel between the two lakes, even though Lake Mendota’s water level is actually five feet above Lake Monona.

Now, please forgive me if this feels completely tangential, but I saw something really eye-catching on my way to the park.

As I was walking north on Baldwin Street, I passed parked plumbing van that, instead of having a plumbing logo on the side, it had a comic strip! The comic strip depicted a superhero plumber saving the day. Is that not awesome? I’d never seen a comic strip used this way before. It was such a creative idea that I had to snap a picture, and I’ve included it in the Tenney Park album. 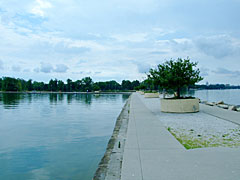 At first glance, the park seems very similar to the James Madison Park just a mile southwest, but Tenney Park has something more to offer: the bravest ducks in all of Wisconsin. (True story.) Oh, and there’s also the matter of its photogenic pier.

The Tenney Park pier juts out hundreds of feet into Lake Mendota, and it’s just begging to be photographed. Something about the style of its lamp posts, its benches, and its overall sheer concreteness give it a contemplative, reflective quality — almost as if a road was once where the lake now flows, and the lamp posts are still waiting for a car to drive up any day now. I walked out to the end of the concrete pier took some contemplative photos from that perspective. Whenever I photograph a place, I try to capture its unique character and atmosphere.

Curiously enough, the banks of the pier were lined with yellow and violet colored boulders. Had these boulders been colored, and if not, what kinds of rocks were these? What do you think? If have any ideas, feel free to let me know! 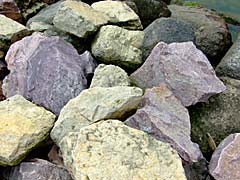 After checking out the lock, I headed to the south side of the park and came to a charming stone bridge arching over the water. Manmade though it was, this artificial river (being the channel between the two lakes) seemed right at home within this small forest reserve. The tree overgrowth over the lock made the park feel older than it probably was, and I was pleased that, instead of merely making a lock, the city of Madison had taken the time to create a pleasing park that benefitted the entire community.

Tenney Park is a charming place, and it’s a great destination for swimming, fishing, or just enjoying the nature around you. If you find yourself in Madison, I highly recommend you experience it for yourself!

Check out all of the photos from this location in the Tenney Park album. All photos in the Gallery can be used as widescreen desktop wallpapers because they are high resolution (1920×1440).