On Tuesday, I hunted down and explored the Chicago Museum of Contemporary Art (otherwise known as MCA). I had specifically planned to visit the museum on this day because admission to the museum is completely free on Tuesdays, and I’m grateful to MCA for making this free-day possible.

In fact, I think I may have felt some regret about this museum if I had paid for admission since, on the whole, the museum is quite a photogophobic (foh-tahg-goh-foh-bick) environment. Yes, I have just invented this word because, after some research, I could not find a suitable word to describe the irrational fear of photography that this museum seemed to have. And as a result, my photography of this museum is, sadly, quite limited. 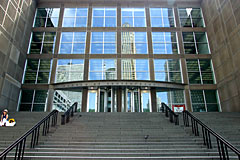 Much of the art in this museum was eye-grabbing and playful in nature, especially the Jeff Koons exhibit. I had come at an especially rare time since this was Koons’ first exhibit at MCA in over 10 years. Koons, if you haven’t heard of him, is one of the more well-known artists of the twentieth century. Francesco Bonami, an internationally known curator, writer and critic, has praised Jeff Koons for “embracing the mundane way of life and giving it back to us transformed,” and I have to agree. Much of Koons’ work seemed to take ordinary objects and somehow make them extra-ordinary.

Seriously, would you blame him?

The exhibit contained an impressive array of his work, featuring works from all his series, including Michael Jackson and Bubbles and the possibly more famous Rabbit. A note to those with children though: be advised that there are rather explicit images behind a back wall. There is a notice about this, but you should probably be careful not to let your child wander alone if you’re concerned about this sort of thing. Be advised.

A curious thing I noticed while researching is that there are many pictures of Koons’ famous balloon dog sculpture, and each photo has a different colored dog, sometimes electric pink, bright blue, or neon orange. Call it a blasphemous question, but I wonder: is it possible he’s only made one balloon dog and simply repaints it different colors for different exhibitions?

How many dogs would Koons really have time to make? After seeing the dog in person, I was amazed at the level of fit and finish Koons was able to achieve on the balloon dog’s huge surface. Due to the immense size of these sculptures, I wouldn’t blame him if he changed the paint instead of creating an entirely new aluminum work every time. Would you? 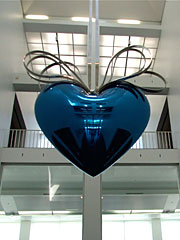 But Koons’ art wasn’t the only art featured in the museum. Many other strange and wonderful creations were to be found on the 2nd floor. Unfortunately, one of the guards regarded me taking a picture with the same severity as if I’d tried to take one of the pieces of art itself, despite the fact that there were no anti-photography notices nearby. Any explanation I could give about the strange and wonderful creations would pale in comparison to any photo I would have been able to show you. I’m sorry, dear reader, I tried. I realize that some artists are extremely possessive about who photographs their work, but in this era of ubiquitous digital photography, it becomes more and more apparent that this policy of “no photos” is fear-based and impractical in the modern age. It’s time to drop fear-based attitudes and embrace sharing and open communication. How can a man who creates such a large blue heart, a universal symbol of love, subscribe to such a fear-based paradigm?

Despite the terribly bored security guards and disappointingly photogophobic attitude of the institution, I did enjoy this museum, but keep in mind that Koons’ work will most likely not be present when you visit since his work was a temporary exhibit. However, you are sure to see art at the Museum of Contemporary Art that you wouldn’t see anywhere else. I recommend you check it out, but save some money and visit on a Tuesday.

Photos from this trip are in the Chicago Museum of Contemporary Art album. All photos in the Byteful Gallery can be used as widescreen desktop wallpapers because they are high resolution (1920×1440).

4 bits on Chicago Museum of Contemporary Art Doesn’t Like Your Camera. Why?