On a Tuesday in August, I visited another jewel in Chicago’s crown: The John G. Shedd Aquarium, a treasure trove of radiant marine life.

Before I get into the story of my visit, I’d like to share some quick stats to help give you a sense of how fantastic this aquarium is:

Of Land-bridges and Vikings 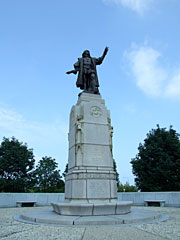 Of course, I found all of this out after I’d visited, but none of it surprises me now. Without a doubt, the Shedd Aquarium exceeded my expectations. On my way inside, I noticed a large statue of Christopher Columbus that was ironically engraved “To Christopher Columbus, Discoverer of America”, and I wondered what the Vikings or those who crossed the ancient Alaskan land-bridge might have thought of that.

After snapping a quick photo of the view of the Chicago skyline, I stepped inside, about to see some of the most fantastic creatures in the world.

Caimans and Dolphins and Whales, Oh My! 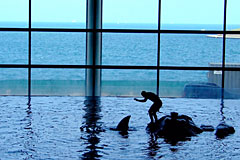 One of the highlights of my visit was a dolphin show that took place in the Oceanarium and featured four expertly-trained Pacific White-sided Dolphins. The dolphins seemed to really enjoy performing, and I know the audience definitely enjoyed watching. Somehow I was able to capture a few photos of them in mid-air as they jumped and played, seemingly effortlessly. In their final jump, all four leapt out in formation and dove back into the water in perfect synchronization. It was a wonderful finale, and the applause was immense.

Afterward, I went below the waterline of the Oceanarium to the lower level to photograph the aquarium tanks through their clear glass walls. The tanks were so huge that the tank walls spanned multiple rooms. One tank even had a baby Beluga whale (you could tell because, unlike its pale parents, it was gray).

Nearby, I also learned a bit about how these huge tanks were filtered and maintained. Through a window, I could see twelve huge particle-based filters. A sign attached to the outside of one of the tanks explained that water was forced down layers of sand and gravel so that solids were trapped in the top few inches of fine-grain sand, and the remaining tanks were handled by another fifteen filters. With these facts in mind, I wandered in deeper.

Surprisingly enough, there was also a small exhibit of lizards on the lower level. And there I met the very rare (and very adorable) Blue Tree Monitor Lizard, only recently identified as its own species. And, as I came around the corner, I found myself sharing a room with a Komodo Dragon for the first time. Later, I found out his name was Faust, and Faust was lazy that day.

To be honest, the photos of Faust are probably all you need to see. Having heard so much hype about the fearsome reputation of Komodo Dragons, I was rather unimpressed by seeing Faust in person. He barely moved when I visited him. Then again, if I were kept well-fed in a warm yet limited environment, I might be lazy too. 😉

Moving onward, I took an elevator down one level to the aquarium’s newest exhibit, Wild Reef. When I stepped out, the creatures were absolutely striking. Such vibrant violets, oranges, greens, and blues… 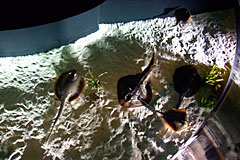 When I first came down to the lowest level, I would have sworn blind that I saw the world’s first flying ray, but alas, it was a trick of my mind. The reality was that the water was so perfectly clear that a family of rays seemed to fly in the air as they swam over the sand. You can tell from the photo that the water appeared almost completely invisible, which was really a testament to how well Shedd Aquarium keeps the water clean. Those filters I saw before were working hard.

A few minutes later, I saw one of the most charming oddities in nature: a Guitarfish. Unfortunately, the extremely low-light condition of the room made capturing an acceptable photo very challenging, but I was able to capture one photo of the creature’s belly (now in the Byteful Gallery). From that photo you can easily see where it got its name: on its snout is a half meter long piece of cartilage that resembles the neck of a guitar! Truly amazing animals Guitarfish are. 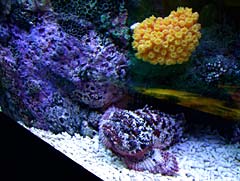 There was no lack of fascinating creatures at the Wild Reef exhibit, such as the tiny white and purple speckled puffer fish that looked like it was trying to camouflage itself, in vain, to match the nearby purple coral. It was a beautiful little creature. I even spotted a few clownfish clowning around. Yes, I found Nemo — and Marlin too apparently.

Yet time was running out. The past two hours had flown by like a hummingbird on caffeine, and I had only 3 minutes left before the aquarium staff would start picking people up and literally throwing them out the door. I hurried to see the few remaining exhibits I had missed on the main floor. (Note to the wise: Always work your way to the to lowest level and end on the main floor.)

In those last minutes, I was able to see the proud Blue Iguana (which seemed especially happy to have its mugshot taken in the last few minutes). I was surprised to see that it had a red iris. Is this typical for lizards? I also snapped a photo of a massive sea turtle that looked older than Chicago itself, though I may have simply been imagining it. I mean, just look at it! (You’ll see what I mean when you see the photos in the gallery after you’ve finished this article.) If anyone can help me identify the species of this turtle, I would greatly appreciate it. I’m not a biologist by any means, so please forgive my ignorance regarding lizard irises and ancient tortoises.

Go Visit it for Yourself! 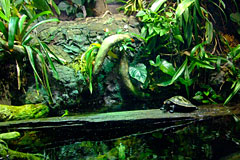 Without a doubt, the Shedd Aquarium is one of my top 5 places to see in Chicago, and I would visit again. It’s a wonderful way to see how beautiful and precious the life from the Earth’s oceans is. And the amazing part is that even though it contains over 2,000 species of fish, it’s still only scratches the surface of the unimaginable diversity of the Earth’s magnificent ocean.

If you have the means, please visit the Shedd Aquarium. There’s something there for everyone to enjoy, and it’s breathtaking in its own special way — an experience you won’t forget. And I certainly haven’t covered everything here. The Shedd Aquarium is simply too dense to fully appreciate in just one visit. Go visit it for yourself, and be sure to say “Hi” to Nemo when you get there. 😉

Photos from this trip are in the Shedd Aquarium – Chicago album. All photos in the Byteful Gallery can be used as widescreen desktop wallpapers because they are high resolution (1920×1440).