Late last summer, I visited the Henry Vilas Zoo in Madison, Wisconsin, USA. Upon seeing the front gate of the Henry Vilas Zoo, one would probably not assume that the zoo was anything special, but beauty is usually beyond initial impressions.

The zoo’s narrow gate opened to reveal a path heading straight, a shop to the left, and a complex of buildings to the right. I turned and headed toward the buildings to the right. Inside were various members of the primate family: gorillas, ring-tailed lemurs, and orangutans. The orangutans seemed to be having the most fun, climbing around the ladders and ropes inside their large plexiglass cage.

The building exited out near the lion area, complete with a large fallen tree and huge boulders. Last time, when I had visited here in January, a lion and lioness were relaxing on the rocks, but none were in sight today. I snapped a picture because it was a pleasant landscape… even without the lions.

Heading down past the shop, I made my way to the Malayan Tapirs, strange animals that reminded me of a cross between a hippopotamus and a small elephant, though they’re actually more closely related to rhinoceroses. One tapir bathed in a small pool as another looked on, and I wondered if they felt out of place so far from Southeast Asia. Later I was surprised to learn that in Japanese anime, tapirs can actually eat people’s dreams.

Next came the White Rhinoceroses, a truly graceful animal for what looks like a living tank at times. As the two walked around there sizable pen, the texture of their skin made me wonder if they were possibly a genetic experiment of aeons past. But that’s impossible, right? Passing the rhinos, I took a brief look at a lone camel, but this 2-humped Bactrian Camel wasn’t in the mood to be photographed and walked away.

In the distance I thought I saw a giraffe, but it disappeared behind an usually tall building. Is it true? Is the tallest living land animal really here? I hurried over to the building, and then the smell hit me. 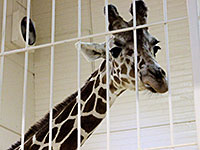 It wasn’t a bad smell per se, but the two towering giraffes overhead left no guess as to its source. I was in a room with giraffes. Sure, there were bars between us, but that didn’t change the fact. I was really in a room with giraffes. Unfortunately, the giraffes didn’t look very comfortable in the, albeit very large, holding area. As I was snapping photos of them, one even looked directly at me, and he seemed to have a questioning look in his eyes. Or was I only adding meaning where there was none?

Only 1000 KM north of the Caribbean

I exited the large room and saw a small pond filled with a beautiful flock of Caribbean Flamingoes. Most were a beautiful pink-orange color and would frequently stand on one leg for no apparent reason. A White Pelican was also in the pond with the Flamingoes, though I wasn’t sure why a bird native to southeastern Europe and Asia would be living with Caribbean Flamingoes. At any rate, it looked interesting, and they seemed to get along alright. The pelican even walked up to me and gave me a great opportunity to take a portrait of its strange face. Thanks Mr. Pelican!

Behind the flamingo display, I found another area that wasn’t active when I had visited in January: Otters! These Northern River Otters were in an aquarium-like setup and seemed to be having great fun swimming up to the glass and pushing off, doing backflips into the water. For small mammals, they could swim quite fast. Perhaps they were excited from all the attention they were getting as people gathered around. They seemed to glean their greatest joy from oneness with their surroundings.

Heading to the Aviary

On my way to the Aviary, I passed some Capybaras leisurely sitting in the grass, watching passers by. They weren’t here in January either, most likely not being able to withstand Wisconsin’s January temperatures.

Being a strange Aviary, the first thing I saw inside the Aviary building were water creatures. A Motoro stingray even decided to show me its mouth as I passed by. The light was so dim in the area, I would have done well to use flash, but as they say, hindsight is 20/20.

Past the stingrays were some fish, including piranha fish who decidedly failed to live up to their reputation. They seemed rather docile, but that may have been because they weren’t actually eating anything at the time. A panel that read “Piranha Facts” hung above them and further deflated the mythos around piranhas, explaining that “people are certainly not preferred prey”. Haven’t these zoo keepers seen movies?! Seriously though, I’m glad that I’m not #1 on the piranha gourmet menu. From the panel, I was surprised to learn that they live to be over 25 years old. That’s rather long for a fish, isn’t it? 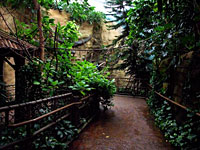 A wall of humid air hit me as I finally stepped into the Aviary itself, lush plant life all around me and above me. Far below me was a giant Aldabra Tortoise, which will probably live to be over 100 years old. Why had they put the tortoise so far down below the path? I did the best I could to photograph the tortoise from a distance. The light was dim down there: not exactly the preferred conditions for photography.

After snapping some photos of a few birds I have as yet been unable to identify, I continued down the Aviary path, only to find a unique kind of duck… that I also couldn’t identify, and I didn’t see a panel describing it either. If anyone can identify the blue tropical birds, the yellow-breasted bird, and this mysterious type of duck in the Henry Vilas Zoo album, please let me know in the comments. I would really appreciate it. (EDIT: More info in the comments of this post.)

Not all was ineffable, though! Nearby were a group of irritable Blue and Yellow Macaws. One Macaw even shot me an accusatory look as I took its portrait. Though these birds have an attitude at times, they are quite beautiful. (The portrait I took is the last photo in this article.)

Polar Bear with an Attitude 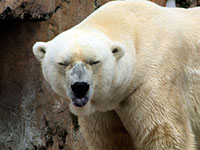 Just outside of the Aviary is the bear area. A few variety of bears were there, but the polar bears proved to be the most entertaining. One polar bear in particular made growling faces to the crowd. I’m glad I took plenty of pictures, because when I returned home to view the photos on my Powerbook, I was delighted to find proof of what the polar bears really think of zoo visitors. Imagine my surprise when I discovered that I took a photo of a polar bear sticking his tongue out at me! 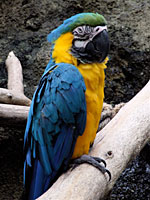 Not long after, it was announced that the zoo would soon close, and I began heading back towards the front gate. On my way out, I observed a group of African Penguins scuttle around their man-made peninsula. They seemed out of place in the Wisconsin summer weather. Each one of them had a color-coded tag on their wing. I wondered how I would feel if I spent the rest of my life with a tag around my arm. Still, their life expectancy is probably longer in captivity since they’re protected from their natural predators. And as people have one-on-one experiences with some of the strange and wonderful creatures this planet has to offer, their eyes are opened to how precious this planet’s diversity is. Perhaps the greatest service that a zoo can offer is awareness.

Check it out for yourself!

A big thank you to Henry Vilas Zoo for providing everyone with the opportunity to experience, for free, some of the wonderful diversity of our planet up close. If you find yourself heading to Madison, I highly recommend you check this zoo out!

All photos in the Gallery can be used as desktop wallpapers because they are high resolution (1920×1440).

5 bits on Henry Vilas Zoo Review: Do the Animals Mock Me?