The following article is part of a series of articles chronicling my trip to Dallas in December 2007.

A golden statue of exquisite detail held its fingers in a peculiar way, and behind her a cold winter landscape shone through large windows.

This particular statue was in the image of Guan Yin, the bodhisattva of compassion. A bodhisattva is a being that compassionately refrains from entering nirvana in order to save others. Created during the Sung Dynasty, the statue was nearly 1,000 years old, and it seemed to contain a hidden meaning that was perhaps lost by being in a western museum. 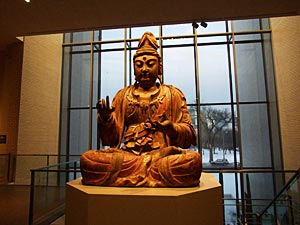 Where was I to see such a statue? I was standing inside a truly vast fine arts museum: the Minneapolis Institute of Arts. I had walked here through a cold wind and past tired neighborhoods. This museum ranked one of the top locations to see while in Minneapolis so I was grateful to be within walking distance. When I opened the museum’s large glass doors, a blanket of warm air engulfed me; and after grabbing a small map, I began to surround myself with things of the past.

The Sunburst caught my eye first. Being a huge, yellow, blown-glass structure hanging from the ceiling, the Sunburst created by Dale Chihuly in 1999 seemed to infuse creativity into the very space that surrounded it. Later I was surprised to find out that it weighed approximately 3,000 pounds — over 1,300 kilograms, and after exploring the area around the Guan Yin statue, I headed over to the Sunburst again. Now that I was on the second floor, I could photograph it more closely.

Satisfied, I continued wandering through the museum. As I wandered, the museum seemed to go on forever and I began to realize how vast it truly was. Later, I learned that the campus stretches across 8 acres of land and features an encyclopedic collection of approximately 80,000 objects spanning 5,000 years of world history. In one afternoon, one can only scratch the surface of a place so vast. 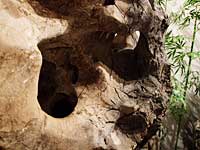 Not far from the glass sculpture, I entered a Garden Room where a Chinese rock garden stood with huge, perforated limestone rocks from the Chiang-nan region of China. A sign inside the room explained that these towering T’ai-hu stones represent The Great Mountains of the Universe. The entire room seemed to radiate serenity and peace, and the stones felt ageless. The museum had even fashioned a kind of stone doorway into the Garden.

Continuing on, I found some truly ancient works of art, including a statue of Doryphoros, the Spear Bearer. This was the finest of the four surviving Roman copies of the original bronze statue by the Greek sculptor Polykleitos. Standing next to Doryphoros, one can almost feel how ancient it is, communicating its age of over 2000 years. If only it still had its left arm…

Probably the oldest object I saw that day was the Egyptian False Door which was over 4000 years old. In Egyptian culture, a false door was the portal through which the ka, the immortal spirit of the deceased, could pass through to partake of offerings left by priests. This false door came from the cemetery area west of the great pyramid of Ghiza near Cairo.

According to the sign next to it, the inscriptions on the false door commemorate Lector Priest Iry-en Akhet, and list ritual prayers to the gods Osiris and Anubis to facilitate his voyage to the afterlife. Apparently repetition was important in Egyptian culture because Iry’s name is repeated countless times to ensure the survival of his ka in the world beyond. While looking at the photo of the door, it’s interesting to remember that, along with most Egyptian sculpture, the door was once painted in brilliant colors.

Around this time, I discovered more and more abstract and inexplicable art. I continued wandering from room to room, and the rooms connected in strange ways. Many rooms had more than two entrances and the entire museum seemed to flow through itself, which may explain why 3 minutes later, I found myself looking at dark, abstract sculptures by internationally renowned Japanese sculpture Hayashi Yasuo – forms that seem to ooze around one’s mind.

Then, from a distance, possibly 3 rooms away, I saw an orange neon light. When I arrived, I realized that I was looking at quite a unique piece of art, a strange shadow figure with an orange light behind it. This untitled piece by Ernest Whiteman was created out of black steel and a single neon light. The contrast between the black steel and orange neon glow was a powerful effect and seemed to deeply want my attention.

Nearby, I spotted another unorthodox piece called Dancing Shards by Ta-coumba Aiken and Peter Jadoonath, who incidentally have some fascinatingly futuristic names. This piece, made of wood, ceramic, and iron reminded me of sea-faring nations who had their ships dashed against the rocks. Certainly thought-provoking piece. 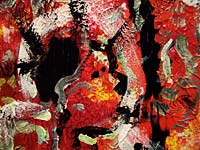 The next piece was so large that I had to stand back rather far to photograph the entire piece. Yet it contained small details that were playful and expressionistic, as well; so I photographed the near and the far, slowly getting a wider and wider perspective until the entire painted cloth was visible in a single photo. This piece was created from 4 strips of pained cloth and seemed to relate the idea of creativity and balance, as it clearly borrowed from yin-yang symbolism. Of course, this piece will mean different things to different people, as all art does. 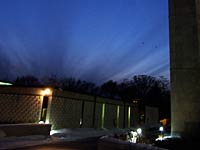 I glanced at the clock and realized that I only had 9 minutes left before the museum closed. I continued onward, knowing that every minute counted. I quickly admired Lepine and Coteau’s Astronomical Mantel Timepiece — when suddenly it was time for the museum to close, and I had to figuratively return to my own time. I was thankful to have been able to come here, and looked forward to exploring the museum again. Perhaps I would return in 5 days when I returned to Minneapolis.

I exited through the museum’s side door and looked around. I was now in a small courtyard surrounded by buildings on three sides. I walked ahead to a building with a large circle embossed on the front of it. I surmised that this must be the Target building. By now it was beginning to get dark, and as I began heading back, I noticed ravens flying in the distance.

p.s. I did return to the Minneapolis Institute of Arts and finished my exploration of the museum. Those photos are alongside the other museum photos in the gallery.

Check out all of the photos from this event in the Minneapolis Institute of Arts album. All photos in the Gallery can be used as desktop wallpapers because they are high resolution (1920×1440) just as the fullscreen & widescreen wallpapers are.