On 2007 Dec 15, I awoke to a clear bright morning. For breakfast, I made myself some oatmeal and added some sliced bananas. Today I would be catching my flight to Dallas and had to be wise with my time.

Travelling light was of great value to me that day because once I left my friend’s apartment, I had to haul everything I had wherever I went — there would be no time to return. 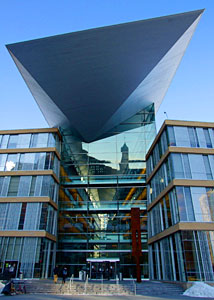 I caught a bus into downtown, near the train station. When I arrived, I discovered that I was well ahead of schedule, and did what I normally do when I’m in the middle of a large, vibrant city with time on my hands: I wandered. Wandering is a valuable tool in the traveller’s arsenal because it allows spontaneity to enter into the trip and always produces surprises. I didn’t have to wander too far to find something of interest. Just a couple blocks north, I discovered the Minneapolis Public Library. Its architecture was incredibly ambitious, wielding a huge angular roof overhanging the entrance.

After taking this opportunity to photograph a few other interesting pieces of architecture within view, I made my way inside the towering library. Inside, I was greeted with the sight of a long, tall hall spanning the library’s 4 levels, complete with two glass elevators. Before I did anything else, I walked to the opposite end of the expansive hall to get a photo from the other direction: this architecture seemed begging to be photographed.

Passing the entrance to the library’s colorful children’s area, I walked up to the front desk and asked for a map. Through talking with the librarian, I learned about strange moving shelves designed to save space. I had been to large libraries before, but had never seen this. He showed me a room filled with moving book shelves that were controlled by 3 buttons on the front of each shelf. Apparently they had been doing this for some time, and I wondered if libraries would be completely robotic someday.

No Athena To Be Found

I decided to ride one of the glass elevators up to the second floor, which was disappointingly very similar to the first floor, except on this floor there was a dignified wooden arch over a glass door, which was locked. Beside the arch, it read “The Minneapolis Athenaeum”. I had never even heard of an athenaeum, so it’s possible you haven’t either. An athenaeum is a specialized library used for literary or scientific study, and it sometimes requires special membership, such as this one did. I peered through the glass and saw nothing especially photo-worthy. 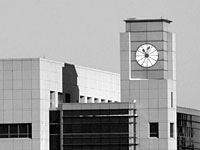 When I arrived at the north side of the library I was greeted with a spectacular view of… a slightly snow covered parking lot. In the distance was a clock tower; and through the magic of a 10x optical zoom lens I was able to snap a decent shot of the clock tower, which, according to my own clock, was actually 3 minutes slow.

I continued wandering the vast library, and found what I’d like to call an “unfireplace”. An unfireplace is something that looks like a fireplace, but where there should be fire or at the very least wood, there are only rocks. Above the unfireplace was what I can only describe as a wreath of 12 small violins. Yet time was running short, and I had to catch a train soon. I headed back down on a glass elevator, swung the glass door open, and my feet hit the street once more.

It was time to take a train ride.

Check out all of the photos from this event in the Minneapolis Library & Train album. All photos in the Byteful Gallery can be used as desktop wallpapers because they are high resolution (1920×1440) just as the fullscreen & widescreen wallpapers are.