I conclude this Dallas Trip blog series with a compilation video of my trip back. Over the course of one day, I used 9 different kinds of public transportation to cover over 1,000 miles from Dallas, Texas to Minneapolis, Minnesota – all without setting foot in a car. It was quite a day, and I’m pleased to be able to share a sliver of the experience with you in the form of this video. A list of all articles from this series is at the bottom of this article. 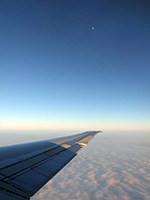 More time and energy went into creating this video than any of the previous videos, involving dozens of editing passes to identify and strengthen weak points in the timeline. Originally, the video didn’t feature a map montage, but the idea occurred to me to overlay a moving map to create a montage that lent a sense of direction to the slideshow. Making the map montage involved many steps to achieve, but the end result was well worth it. Some of the photos used in the montage are in the Leaving Dallas album of the gallery.

Once all of the main pieces were in place, I began looking for royalty-free music. In a different world, I would have used music already in my music library, but unfortunately record labels of this era, most of which fall under the RIAA, are less than enlightened and do not allow podcasts to use their media without a specific license and royalty agreements (i.e. payment based on usage), which is costly and not worthwhile to the vast majority of podcasters. It’s much easier to find a musician independent of a large record label and get permission to use their music instead. That’s where the Podsafe Music Network comes in.

After listening to dozens of songs about travel, I finally settled on “Future Travel” by Dreamline and “Safari (Travelling)” by Mpemba Effect. Amazingly, Mpemba Effect, which I think is pronounced “pemba effect”, is from South Africa which explains their unique tribal sound.

Once I had settled on what music would be used, I began making the finishing touches such as ‘grooving’ the video to the music — harmonizing the rhythm of the video to the rhythm of the music. While not immediately obvious, this makes the video much more cohesive and pleasing to view. I also realized that I ought to start adding a Creative Commons notice at the end of my videos to remind people that these videos are released under a much freer license than standard copyright. I went over to the Creative Commons Press kit and created a high resolution graphic to show at the end of this and future videos. If requested, I can add this graphic to the byteful gallery.

Once the video was done encoding using the settings specified in “How to Encode Video for a Podcast”, I realized that the video seemed washed out, and I went on a wonderful google adventure in which I learned of a 3 year old Quicktime h.264 encoding bug. Just goes to show, that even a seemingly innocuous task of putting out a travel video can lead down a rathole of technical complexity. At any rate, this bug can be overcome relatively simply, and I will outline the solution in the next article.

Without further ado, I present to you “Wheels, Jets, & Rails”: