After exploring the Minneapolis Library, I looked around for a light-rail station. I found one that didn’t consist of much more than a track, an elevated platform, and some ticket machines. Soon after I arrived, a train stopped, heading the opposite direction. And since no advertising space is ignored in the 21st century, the entire train was covered in one huge advertisement for broadband internet. 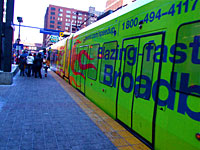 However, this actually may have made the train look better than normal because the ad sported some flashy flames on a green background, making it the most eye-catching form of public transportation I would ride during the entire adventure. Soon my own train arrived, and I didn’t miss the opportunity to shoot some video of the quick trip to the Minneapolis International Airport.

To the Gates We Go

Just twenty minutes later, I was standing underground in the airport station. After heading up two long escalators, I found myself in a smaller room with tram doors on both sides. Apparently the only way to get to the airport gates from here was to take a small tram. I soon discovered that the small tram had no driver and was completely automated. I entered, somewhat apprehensively, into the seatless steel box that was to take me a few hundred meters north to the airport gates.

The first thing I noticed about the airport were the signs. Along with English, everything was also written in Japanese. I wondered if this airport received enough Japanese-speaking visitors to feel the need for Japanese signs, something rather strange for the United States midwest. However I later found out that the airport serviced nonstop flights to Tokyo, so I suppose the signage is justified.

I continued through the usual rigamarole that is modern air travel: removing shoes, emptying my pockets, answering ironic questions about my identity, etc. Because I wasn’t checking any luggage and carrying all of my possessions onto the plane, I got to send every last one of my questionable possessions through the scanning machines. I even got to place all of my personal hygiene products into a zip lock bag, which still strikes me as absurd.

When I finally arrived at the secure zone (i.e. place where the airport allows businesses to sell overpriced coffee and useless trinkets), I noticed a few amusing developments. Firstly, I didn’t realize that shoe shining was still popular, but apparently it’s popular enough because an entire space had been reserved for just this task. I, however, was happy with the state of my shoes and secretly suspected that they would disintegrate if shining was attempted.

But it gets better.

Beside the shoe shining booth was a lottery outlet or what I like to call: Minnesota State Lottery’s last attempt to take your money. I wondered if any of them actually thought they would ever win since there’s a better chance they would get struck by lightning. Who knows, lightning might be more fun anyway. 😉

An Accessory to Shopping 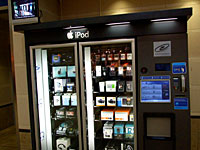 Nearby was something that probably shouldn’t exist. In front of me was what I can only describe as an iPod vending machine. Yes, one could slide their card through and purchase an iPod or an iPod accessory from this completely automated kiosk. At this point I realized that in some sad way, airport mini-malls are an exaggerated reflection of current American culture. I also wondered who would want to spend time filling up an iPod with music at an airport or how many people even could.

Having had my fill of people-watching, I continued down to what I dubbed “The Rainbow Connection” concourse. I even arrived at the gate in time to see my plane land. When I went to sit down onboard the plane, I soon realized that I had received the worst seat possible. Thankfully I soon realized one seat was completely vacant, and I wouldn’t have to sit in the no-legroom section after all. A big thanks to the flight attendant whose name I can’t remember who was so nice and pointed out that I could sit in that far better spot!

There then followed the usual excitement of takeoff, the breathlessness of the wheels leaving the ground, and the subsequent boredom of being trapped in a metal tube with a hundred or so other poor souls for over an hour. I tried to pass the time by reading, but time always seems to slow down in that small space of the cabin.

When I landed in Dallas, I wondered what Texans called this season, because I wasn’t surrounded by winter anymore: there was GREEN.

Check out all of the photos from this event in the Minneapolis Library & Train album. All photos in the Gallery can be used as desktop wallpapers because they are high resolution (1920×1440) just as the fullscreen & widescreen wallpapers are.