Today I’d like to tell a tale about intuition, persistence, and 7 mysterious orbs.

Six years ago, I created a 3D scene in which a crescent-shaped island sat in a calm blue sea. I came across the crescent shape somewhat by accident as I was playing around with Bryce’s modeling tool. The island shape felt intuitively correct for me, and I soon discovered that any alterations I attempted only seemed to reduce the attractiveness of the island’s shape. I named this scene Crescent Island and have been using it as a desktop wallpaper off and on for six years.

Two years later, I began experimenting with the idea of a nighttime version of Crescent Island, but I never achieved a scene that felt intuitively correct for me. Then, a few days ago I came across some of the original Bryce 3D scene files for some of my earlier wallpapers. The file called “Crescent Night” seemed to be calling out to me to finish the task I had started, and then shelved, four years before. But this time things felt different, and I decided to delve in again.

Back then, I had been experimenting with placing orbs into the side of the island, but the lighting was not placed in an aesthetic way and gave the orbs an unattractive shadow. Since 4 years had passed since I had looked at this project, these glaring errors jumped out at me at once, and I began reinterpreting my old intention — creating a night scene in a more realistic light. In a way, this is an extreme version of what I talked about in How to Renew Your Perspective in 5 Steps, but usually 4 years is not required to gain a fresh perspective on a scene such as this. Although I do wonder if the wallpaper wasn’t being looked over far far in the back of my mind for the past 4 years and my mind was simply waiting for the opportunity to unleash these new ideas.

Once I had correctly lit the scene, Bryce produced an unexpected surprise. A pleasant reflection of the island was created in the water, and the overall texture of the water was even more vivid than the original scene I had created 6 years before. Positioning the stars in the sky in a pleasing way was the trickiest part of creating Crescent Nightfall, but after literally dozens of tries the effort was worth it. Then later, I discovered that the stars reflection on the water looked more like dust on the screen than stars reflecting in an ocean and found a way to smooth out this effect in Photoshop. Following that, I had to invent a way to create a 4×3 version without creating a moon that looked like it was on a diet. All of these situations reminded me of one of the Great Truths I’ve discovered about art:

Persistence distinguishes a highly creative person from a person with just another good idea.

After all, without persistence how can we achieve our highest potential? 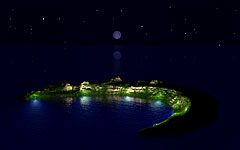 Persistence paid off and after 9.5 hours of render time and still more hours spent refining in Photoshop, I present: Crescent Nightfall. Check it out in widescreen.

Why have 7 orbs been built into the island? Who built them? What is their purpose? I’ll leave those answers up to you. Enjoy!