On the day of the concert, I awoke later than I hoped because I had been invited to a fantastic dinner the night before. I got to bed a bit later than planned, and today was an important day. Today was the day of the 7th Annual Holiday Extravaganza featuring The Polyphonic Spree, and this year there would be 2 shows in a row, though I didn’t know it yet.

After I made a quick breakfast, I began exploring the area on a bike that had been lent to me during the trip. When amidst new surroundings, getting to know one’s area is very important. Thankfully, the Lakewood Theater was easy to find, and even though it was early afternoon, people were already lining up. Not wanting to miss any of the action, I biked back and got my camera and jacket. By the time I returned, the line had stretched partway around the block, but there was still plenty of time.

From talking to people in line, I soon realized that many had come from all over the country to be here. Some came from Georgia, Colorado, or even Florida to see the show. In fact, later that night I met someone all the way from Australia! I then found out that there were going to be 2 shows that night, and apparently the ticket I got online was for the first show. I was surprised, partly because Ticketmaster made no mention of a second show that night, but mostly because The Polyphonic Spree had never, in their entire history, done 2 shows in one night before. Because each show had 2 sets of songs, this would mean 4 sets total and over 4 hours of live music. Naturally, I was glad… until someone told me they might be sold out, but I held out hope. 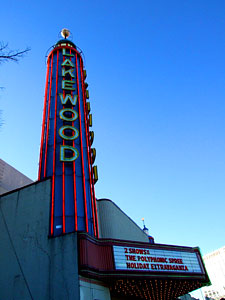 The line continued to move, and soon the Lakewood Theater pillar towered over us. When we reached the stage area, the atmosphere was of charged anticipation. Hundreds of people were excited and the Christmas feeling abounded. Onstage the opening act, Gustafer Yellowgold, was already playing. Gustafer Yellowgold is an interesting act that features uplifting songs about life and is geared somewhat for children though many adults also enjoy the purity of the music. I encourage you to check them out for yourself at their website.

Joy to the World

Soon Gustafer handed the stage over to The Polyphonic Spree, and Tim, the leader of The Polyphonic Spree, invited all of the children onstage to sing with the band. Dozens of kids ranging in ages from 5 to 18 came up onstage, most wearing red and some even wearing Santa hats. The band began with ‘Christmas Time Is Here’ and followed it up with a very rockin’ rendition of ‘Little Drummer Boy’, and the kids enjoyed it very much. With Confetti and white balloons dancing in the air, the Christmas set ended with a jolly ‘Joy to the World’, and just as quickly as they had appeared, the band left the stage to prepare for the rock set that was to come. 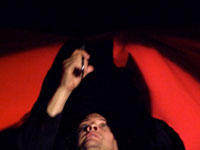 About 20 minutes later, we began to hear the sounds of intro music. Toward front of the stage, there was now a short, but very wide, red curtain set up obscuring the view of most of the instruments.

Suddenly scissors poked through the curtain from behind and slowly began cutting out some type of shape. After a few moments, the shape began to look like a heart, and the heart shape fell revealing Tim holding the scissors. As the music approached a fever pitch, Tim began cutting upwards until finally the curtain was cut in half and fell as music exploded into the room. The whole band was suddenly revealed as they burst into the opening lines of ‘Running Away’, the first song on their latest album. 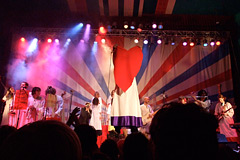 What transpired thereafter can scarcely be put into words as I, along with the crowd, were swept up in a whirlwind of excitement and melodic ecstasy. It was a truly incredible performance: a cello was played upside down and still sounded amazing, the band was completely energized, and the climax of the show was incredible and ineffable as usual. Afterward there were even free vegan cookies made by fans of the band. These devoted fans of the band, known as Spreebs, are quite an amazing bunch. Some of them make cookies for the Holiday Extravaganza every year and many helped decorate the theater earlier that day.

I emerged from the polyphonic sound with my head buzzing with energy. As may have become obvious by now, being present at a Polyphonic Spree show is not an experience that can be adequately described with words.

Night had already fallen, and I remembered that when I had first entered the theater, a fan told me there were still tickets available for the second show. I considered whether I wanted to do it all again. What was I thinking? I realized I definitely wanted to give it another go, and got back in line. I’m so glad I did, because the second show had new surprises in store.