Rarely am I able to step into a place with such vast wealth of knowledge as the Field Museum of Natural History in Chicago, Illinois; and I do not use the word “vast” lightly.

First opened in 1893, the Field Museum is a world-class natural history museum enclosing over 1 million square feet with more than 20 million specimens, including Sue, the largest, most complete, and best preserved Tyrannosaurus rex fossil ever discovered. Today I’m going to talk a bit about my experience at the Field Museum and point out what I consider the top 3 exhibits you simply can’t miss.

Fossils in the Floor 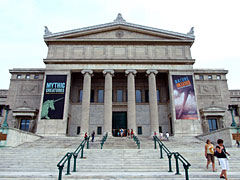 Interestingly enough, a curator that I met on the first floor told me that most of the building isn’t even accessible to the public. Two floors were above the publicly accessible 2nd floor, and two floors were beneath the publicly accessible lower floor, making six total. With a sense of mystery, he told me about the different levels and how the floor I was standing on actually contained pieces of ancient fossils from a sea bed. I looked down and photographed these small white fragments embedded in the tiles. He also explained some of the history of the building and how it was used as a hospital in one of the nation’s larger wars. I wasn’t sure if I could believe him entirely, but this older-looking gentleman did work for the museum, so I decided to give him the benefit of the doubt.

Without a doubt, the first thing you’ll notice when you step into the Field Museum is the looming T-rex on the first floor. And this magnificent T-rex is definitely in my list of top 3 exhibits to enjoy while at the museum. The T-rex, nicknamed Sue, is nearly 13 meters long (42 feet), 4 meters (13 feet) tall at the hip, and the most complete T-rex ever discovered. It was simultaneously wonderful and frightening to imagine that this 7 ton creature once roamed the Earth hunting its prey. 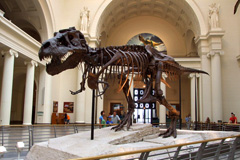 I decided to wait a bit for the 11:15 tour, and it was definitely worth the short wait. The tour guide introduced the main areas of the museum: Paleontology, Geology, Biology, and Egyptology, among other things. When this brief introduction finished, we were near the Egyptian exhibit on the first floor which was a small stone building. The huge stones looked as if they really were from Egypt, and inside this small stone building I met the same curator I’d met before the tour began. He talked at length about what the hieroglyphics on the walls meant and briefly discussed Egyptian pharaohs and their ways of life. He departed as quickly as he appeared (such as many fascinating people are apt to do), and I began exploring the maze of a museum on my own.

#2. Step inside the Ancient Egypt exhibit

The Ancient Egyptian exhibit is wonderfully diverse, and it’s my second pick for my list of top 3 exhibits you can’t miss at the Field Museum. Within the Egyptian stone building, I found a staircase going up over a stone wall and then down again. (It was one of the few staircases I’ve used in my life that went up first in order to take you to a lower level.) And soon I was descending down the flights into darkness.

At first, I couldn’t see much. 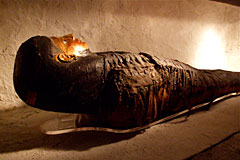 Once my eyes adjusted, I could see I was now sanding in a rather dark hallway with dramatic lighting around me. Actually I was in a replication of a Mastaba Tomb. I turned a corner and saw a mummy for the first time in a long while. The gilded mummy had gold-embossed face, and it was holding up pretty well considering its age of about 2,300 years.

As I neared the heart of the Ancient Egypt exhibit, I passed a wooden coffin with the Eye of Horus (also known as Ra) painted on its side. The Eye of Horus symbol was frequently painted on coffins to protect the occupant in the afterlife. Farther on, I was delighted to see Egyptian scrolls, memorial stones, and even a real Egyptian. Yes, the unwrapped mummy of a boy was carefully placed on a blanket behind some glass. A sign explained that the museum didn’t know when or why the boy’s wrappings were removed and pointed out that, before x-ray photography, mummies were often unwrapped to simply see what was inside. While exploring, I also discovered other fascinating facts such as how to play a board game that the Pharaohs used to play and remains of an Egyptian sculpture that looked strikingly like Michael Jackson. Is this proof of Michael Jackson’s heritage or a mere coincidence? I’ll leave that up to you to decide.

Probably the most surprising element was the Egyptian love poem entitled “Last Night Made It Seven, My Eyes Missed My Kitten” which was delightfully frank about romantic love. Here’s an excerpt:

“Why, that girl’s better than any prescription,
more to me than the Pharmacopoeia,
My own secret Hathor Home Remedy?
Her slipping into my room from the road!
(have her examine me, then watch my energy!)

See the entire poem in the gallery.

Seems little has changed in three thousand years when it comes to romance, including man’s propensity to write poetry for his beloved. How endearing. 😉

Soon after, I took a brief detour into the Underground Adventure exhibit in which everything is oversized and the visitor is plunged into a bug’s eye view of the underground world. If you like giant earwig models, giant spiders, or giant pennies that say, “In Soil We Trust,” you’ll really dig this place. The exhibit did a good job at showing how alive soil really is, but I would have appreciated more interactivity.

The Hall of Jades and Mysterious Bi discs 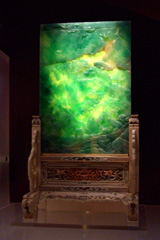 After snapping a picture of the Stanley Field sculpture, I headed up to the 2nd floor where fresh wonders awaited me. I began at the Hall of Jades which featured a 1,130 kg (2490 lb) Nephrite boulder, mysterious Bi discs from the Neolithic era, and a beautiful jadeite desk screen from the Chinese Qing period. A description below the Bi discs explained that the significance of these discs is still a mystery, apparently being used in burials stretching back as far as 4,000 years ago. What could their purpose be? Are they part of a memorial tradition? I can’t help but think of the discs from the movie Tron in which one’s entire life depended on a disc. The disc shape, it seems, has a long and detailed history in human culture.

Just outside the Hall of Jades were some Chinese artifacts. One was an exquisitely detailed ivory carving of the Daoist longevity god, and the other was a wood carving of Guan Yin. You remember Guan Yin, don’t you? It’s the Bodhisattva of compassion. Can’t recall, perhaps? About two years before, I came across the figure of Guan Yin in the Minneapolis Institute of Arts.

Unlike that large statue, this figure of Guan Yin had 24 arms and was sitting on what appeared to be a pine cone. I’d read a bit about ancient pine cone symbology, but I didn’t expect it to show up in Buddhist art from 200 years ago. Of course, the world is full of surprises, and pine cone symbology shows up in the most surprising places. Recommended research.

After briefly examining a trilobite fossil that had been into Earth orbit, I made my way over to the T-rex skull exhibit. Because of its weight, the real skull was on display up here on the 2nd level, separate from the rest of the skeleton. An accurate copy of the skull, one that weighed less, was made for the full T-rex skeleton I saw on the first floor. I enjoyed being able to see Sue’s skull up close, and I couldn’t help but wonder how it really looked all those years ago, when it was alive and warm breath came from its nostrils. 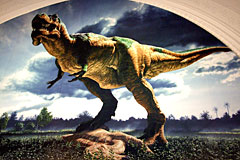 Above the skull was a huge mural of Sue painted by Paleoartist John Gurche. Later I learned that he won the Lanzendorf PaleoArt Prize from the Society of Vertebrate Paleontology for this mural, and I can see why. It’s fantastically textured and cleverly laid out, quite lifelike. The viewer is placed in a subordinate position, making the T-rex look huge and menacing with it’s eyes glowing a soft red and dead prey underfoot.

Nearby were displays highlighting Sue’s furcula (a.k.a. the wishbone), which was the first ever found from a T-rex. This is especially exciting to scientists because only birds and meat-eating dinosaurs have wishbones. The forelimb (a.k.a. what normal people would call the arm) was also on display. Since it’s so short, how the forelimb was used remains a mystery to this day.

And even more mysteries lay ahead for me on that day for the next part of the museum I explored was a cornerstone of the entire museum, and it’s also my 3rd and final pick: The Evolving Planet exhibit. So far, I’d only seen a handful of ancient creatures, but as I soon learned, that was only the tip of the ice burg.

Photos from this trip are in the Field Museum – Chicago and Evolving Planet Exhibit albums. All photos in the Byteful Gallery can be used as desktop wallpapers because they are high resolution (1920×1440) just like the fullscreen & widescreen wallpapers.