It is basically a crime to visit Chicago without spending some time in Chicago’s Museum Campus. Not only is it home to the wonderful Shedd Aquarium and Field Museum, it is also the home of the world famous Adler Planetarium & Astronomy Museum, the oldest planetarium still in existence today. But don’t let that fool you: the Adler Planetarium employs some of the latest state-of-the-art equipment, as well as tons of interactive exhibits that somehow manage to entertain, educate, and hold the attention of both children and adults. 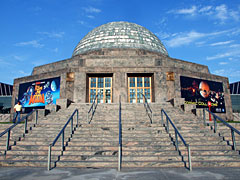 The building itself is impressive, having a huge domed top — for the planetarium part, of course. But that was still to come. You actually enter into the upper floor and can go down from there. The upper floor had some interesting sights, such as a life-like model of NASA’s Mars Rover “Spirit” and a scale model of the solar system featuring a sun that extended beyond the height of the floor.

On the upper floor there were plenty of interactive exhibits such as:

The creators of the museum really made an effort to make the museum as educational and interactive as possible to people of all ages.

Down on the Lower Level 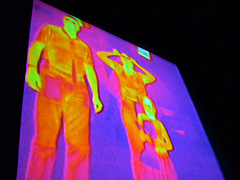 On the lower level, which was quite dark, there was a small theater, which I would see later, and a simulated NASA classroom. Videos of moon landings and space walks were playing on large screens, and beyond that an infrared image of the hallway appeared on a huge screen. I was lucky because just as I approached the large screen, a family of three approached, and their infrared image appeared on the screen. Not sure how much it had to do with astronomy, but it certainly looked interesting! (Hint: Yellow is warmer.)

Probably the most popular attraction on the lower level was the Atwood Sphere: a huge, yet thin, metal sphere with tiny holes in its surface to create a whopping 692 stars. It was designed to show people the alignments of the stars before humans had ever invented any of the fancy planetarium projectors we use today. At the time it was completed in 1913, it was hailed as “…the most advanced teaching model available and the only walk-in planetarium in North America.” As much as I would have liked to step inside and capture the experience for all of you, there was a line in front of it longer than Falkor, and the planetarium show would be starting soon.

However, I did have time to see the immense Dearborn Telescope. When I say immense, I mean that you can’t help but gasp when you see it in person, and I could scarcely fit it into my camera’s field of view. Created in 1864, its 18.5 inch lens was a monster in size. A plaque below said that it was originally created for an observatory at the University of Mississippi, but that the Civil War prevented its delivery. So the Chicago Astronomical Society bought it and created the Dearborn telescope. (More information is available in the description of the picture of Dearborn telescope in the gallery.)

Soon, the planetarium show would finally begin. With my camera slung around my neck, I walked into a large dark room, a huge domed ceiling spanning over me, and sat down on one of the hundreds of plastic chairs arranged around a large center column in the center of the room. Atop the column stood a curious device, almost reminiscent of a telescope, except that the end was rounded and had many lenses on its surface. This was the Zeiss Planetarium projector, of course. 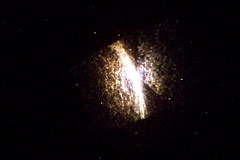 The planetarium show was very enjoyable. We got to see a brief history of the historical origins of the constellations, which constellations were visible from Chicago at certain times of the year, and some tips on how to find them ourselves. As you can see from the photos, the projector is also capable of projecting movies onto the domed ceiling, and one of the movies we saw suggested that the galaxies of the universe, when viewed from the right perspective, were arranged in a predictable, almost fractal, pattern. Of course, it’s only a preliminary observation, but if it’s true it would raise some very profound questions about the nature of the universe…

Quickly Shoot for the Moon

When the show ended, I had about 15 minutes before the show in the other theater would start. In that interim, I had just enough time to examine the Gemini XII spacecraft in Adler’s “Shoot for the Moon” exhibit. After looking at the controls, I gained even more respect for the men and women who learn to pilot these incredible machines. In fact, I was surprised that this ancient hunk of metal even made it into orbit. But to be fair, I was looking at quite an old bird that had flown over 40 years ago, and Gemini had aged a lot since then.

The second show took place on the lower level in the Definiti Theater, a digital video environment that utilized a special domed ceiling. This theater was part of an expansion to Adler Planetarium that happened in 1999. That day, a film about planetary collisions, creatively named Cosmic Collisions, was playing in the Definiti Theater; and, despite its name, the film had some rather poignant and graceful moments. It featured some incredible planetary simulations and postulations about how the moon was created. Aside from being entertaining, it was also an educational film, explaining how the Earth’s magnetic field works among other things, and I think most people in the audience walked away having learned something. 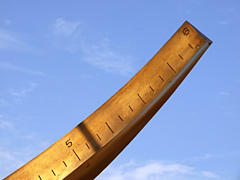 Soon after the Definiti Theater show had finished, the museum closed, but outside of the planetarium were some interesting features, as well. An elegant sculpture entitled “Man Enters the Cosmos” was a reasonably accurate sundial, and a plaque below even explained how to adjust the sundial’s reading to get a more accurate time, depending on the season.

What was more fascinating, though, was Americas’ Courtyard stone calendar. The calendar, built only of short stones that one could sit on, worked on the same principle as the Stonehenge of England, having gaps aligning with where the sun rises and sets at the June and December solstices. The stones were even arranged in a spiral pattern to embody the spiral shape of the galaxies, and I remembered that I’d photographed a plaque inside the museum that mentioned visitors may check the progression of the seasons by seeing where the Sun rises or sets between the two solstice gaps in the stones. 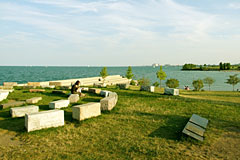 As I photographed the stone calendar, an Asian couple sat on some of the stones, probably deciding how they would spend the rest of their day in Chicago; and in the distance, tiny white sailboats navigated the calm lake. In that moment, as the shadows from the stones grew longer, the afternoon light was rather beautiful.

It’s Out of this World

Whether you have children or not, the Adler Planetarium is not to be missed. Beyond being the only museum in the world with two full-size planetarium theaters and being the oldest planetarium still existing today, the Adler Planetarium has continued to adapt to the changing times and remains an excellent place to explore the wonders of the galaxy around us — the perfect balance between classic and cutting-edge. If you’re taking a trip to visit Chicago, please stop by the Museum Campus. Once you see the dome for yourself, you may just be drawn to go inside and make your own discoveries.

Photos from this trip are in the Adler Planetarium – Chicago album. All photos in the Byteful Gallery can be used as desktop wallpapers because they are high resolution (1920×1440) just like the fullscreen & widescreen wallpapers.