On the surface, Denver’s Cathedral Basilica may seem rather ordinary as cathedrals go, but only to the untrained eye. Sure, its twin spires soar into the sky some 64 meters (210 ft.) overhead, and it’s 75 stained glass windows are a wonderful compliment to its limestone and granite structure.

And yes, I suppose you could say this classic example of French Gothic architecture is somewhat exceptional for being one of the few cathedrals in the United States that has been visited by the Venerable Pope John Paul II. And I suppose you could say it’s interesting that in its 99 year existence, each of its spires has been struck by lightning exactly once. But overall, the Cathedral Basilica of the Immaculate Conception doesn’t hold much in the way of secrets or profound surprises.

Little did I know that I would discover something that most people would never have given a second thought to. And it was right out in the open.

The Immensity of the Scene 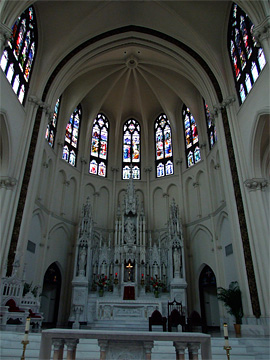 Now, I hadn’t originally planned on venturing inside. Cathedrals aren’t typically near the top of my list when exploring a new city, so I only admired it from the outside at first. But after exploring the Colorado Capitol building, I answered the siren song of this cathedral’s architecture, and I’m very glad I did.

While I’m not Catholic, I could certainly appreciate the beauty of this structural work of art. And when I went inside of this truly massive building, entering what was probably the largest room I’d entered in months, the immensity of the scene towered above me. I looked down and saw a small sign near the entrance that welcomed me and reminded me to talk quietly.

This was a holy place, and you could feel it in the air.

The Most Incredible Stained Glass Art

At first, I saw nothing especially mysterious or surprising. However, the stained glass art was breathtaking. It was certainly the most incredible stained glass art I’d ever seen in my life. The amount of detail they were able to achieve in the coloring and texture is quite amazing from an artistic point of view. And there was no better example of this than the stained glass window featuring a congregation of angels around the Virgin Mary. (At least I’m pretty sure it’s the Virgin Mary. If I am mistaken, please let me know in the comments.) 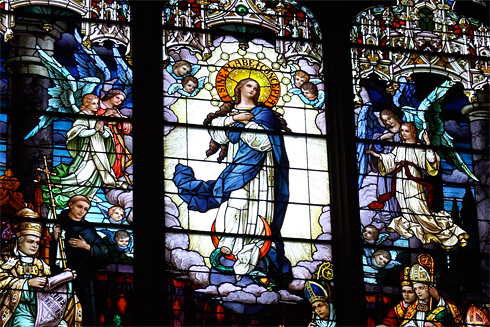 In case you’re curious, the words “Sine Labe Concepta” embedded in a halo around the Virgin Mary mean “Conceived without Sin”. The photos really don’t do this stained glass justice at all.

And then, echoes from a previous age…

Honestly, it’s almost harder to find a window that wasn’t stained glass than one that was. One especially interesting example was high above the organ. 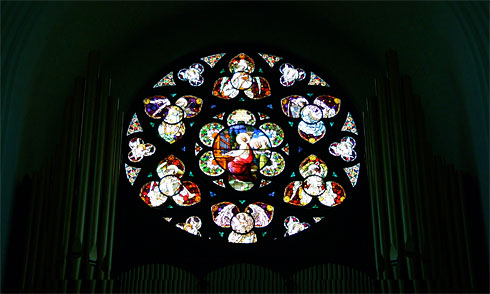 Notice anything interesting about this window?

Yes, it is reminiscent of a flower with six petals. Now Look deeper.

The way that this is laid out bares a striking resemblance to the ancient Flower of Life symbol, said to depict the fundamental values of space and time itself. To be more precise, the layout of the piece (especially the inner area with the smaller circles) bears a striking resemblance to a subset of the Flower of Life called the Egg of Life, which is said to be the shape of a multi-cellular embryo in its first hours of creation.

Not sure what I’m talking about?
Here’s what the Flower of Life and the Egg of Life look like:

As you can see, the Egg of Life (pictured on the right) has a strikingly similar layout as the inner circle of the stained glass design above, and the entire stained glass window is reminiscent of the Flower of Life itself. Yet the Egg of Life was invented at least 2,000 years before the construction of the cathedral. And the funny part about this is, I’ve only recently realized this connection while cropping and color-correcting these photos months later.

So what is the Flower of Life exactly?

If you’re unfamiliar with the Flower of Life, it’s quite an old and remarkable symbol. The earliest examples of the it are found in ancient Assyrian sites, as well as other places around the world. Most notably, a Flower of Life symbol that was created over 2,000 years ago has been found at the Temple of Osiris in Abydos, Egypt. 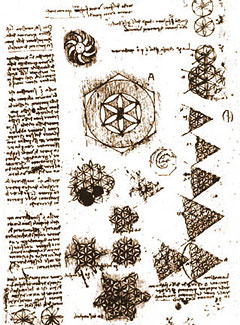 Aside from its fascinating geometrical perfection, one of the things I like about the Flower of Life is that its influence isn’t limited to one belief system. According to this article, it has symbolic connections to the Kabbalah, Hermeticists, Christianity, as well as New Age thought.

Even Leonardo Da Vinci was fascinated by the Flower of Life to the point were he used to draw it repeatedly. The image on the right is one example of his numerous Flower of Life doodles.

Clearly, this symbol’s influence is quite far-reaching and profound.

And from looking at these ancient examples side by side with some of my photos from the cathedral, I can’t deny that there are some curious parallels in the designs.

Were Catholic designers subtly influenced by this ancient symbol? Was it deliberate? An accident? Unconscious suggestion?

In any case, Cathedral Basilica of the Immaculate Conception is a very beautiful place to explore, it won’t cost you a dime, and if you’re lucky it may even inspire a revelation of your own.

Photos from this trip are in the Denver Cathedral Basilica album. All photos in the Gallery can be used as desktop wallpapers because they are high resolution (1920×1440).

1 bit on The Secret of Denver’s Cathedral Basilica