Even though the phrase “Dude, the capitol tour was awesome!” may sound like something uttered during a history class to get preferential treatment from your professor, occasionally it’s actually true, and you can’t help but say it.

After briefly visiting the US Mint and being surprised at just how sinister it looked, I began walking through the lovely green Civic Center Park towards the Colorado State Capitol building. I’d heard it was a pretty interesting place to visit, but I had no idea of the sights that awaited me.

Similar to how I wrote the article about Denver’s architecture, I’m going to cover the Colorado Capitol building relatively quickly using photos from my visit as visual aids. Instead of telling you, I’d like to show you why you ought to stop by the Colorado Capitol the next time you’re in Denver; and to make it interesting, I’m going to limit myself to 7 photos for this article.

Once again, we’re going to go through these relatively quickly to hit on the highlights. Ready? Attention span calibrated? Okay. Let’s begin… 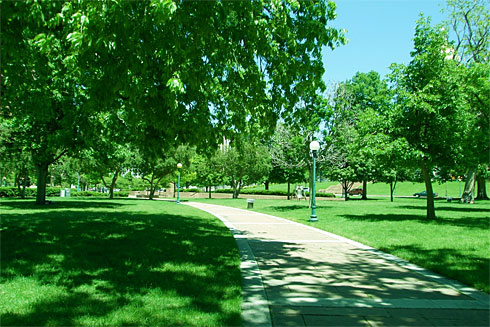 As I said, on my way to the Colorado Capitol I passed through Civic Center Park. Although it contains a lot of historical statues, great walking paths, and plenty of shade, my favorite part of this park was how verdant and vibrant it looked in the summer. And I’m really glad that a good amount of land was set aside to create this park in the middle of the city.

And then, I came upon it… 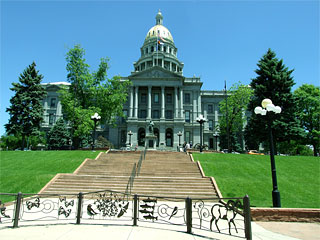 And then I came upon it: the Colorado State Capitol building, the quintessential example of Neoclassical architecture in the city. As mentioned in the Downtown Denver article, the Colorado Capitol’s dome is made of real gold plating, and you can see it glisten from here.

Since this was an important historical landmark, I had the opportunity to get scanned by metal detectors more than once before I could enter the building, but at least it was very mild compared to what air travellers go through these days. After I was scanned, I realized that a tour of the capitol was already in progress, and I joined them. 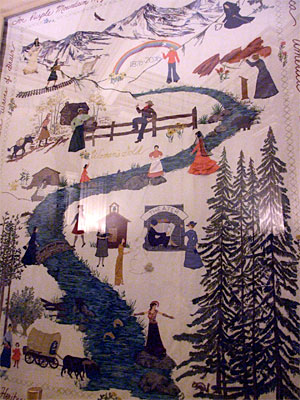 One of the more memorable aspects of the tour was this tapestry called “Women’s Gold” which was created to commemorate the state’s centennial and the country’s bicentennial in 1976. Although it may not look so massive from here, this 9 foot by 12 foot tapestry was a pretty ambitious project, taking 4,500 hours to complete. According to the Colorado Department of Personnel & Administration, thousands of people from 38 states and 9 countries participated in creating it.

What I found especially interesting, was that it very cleverly contains a hidden white rabbit, and apparently no one at the capitol had any idea why. Merely having a white rabbit is interesting from literature point of view (a la Lewis Carroll), but the fact that they deliberately tried to hide it within the contents of the tapestry really raises some questions, not the least of which is, “Why a white rabbit exactly?”

Can you spot the white rabbit?
Kudos to whoever comments and reveals its location first.

Welcome to the Massive Interior 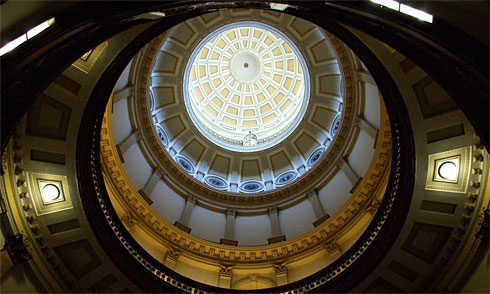 As the tour continued on, we moved upwards—moving ever closer to the top of the capitol dome, a vantage point that I was convinced provided a fantastic view of the city below. In this particular photo, you can see how the color scheme changes as you proceed higher, as well as how massive and magnificent the interior of the capitol is. Although you may not be able to tell, the round windows are actually stained glass portraits of important Denver citizens, and they lie in a middle level between the two floors above.

Even the House of Representatives is Plastic-Wrapped 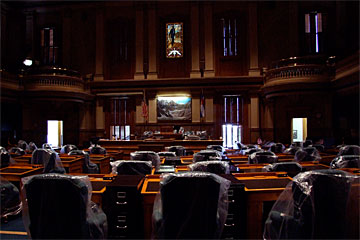 Is there anything that doesn’t come wrapped in plastic these days?

Here’s the Colorado House of Representatives, and as you can see, the chairs have been lovingly wrapped in plastic, ostensibly to keep dust off of them. Other than that, it’s a pretty uneventful room… except of course for the green, red, and white buttons in front of every seat, which I can only assume are used when the House votes on issues.

Unless otherwise corrected, I will take great delight in assuming that the buttons mean “Yes”, “No”, and “Phone A Friend.” 😉 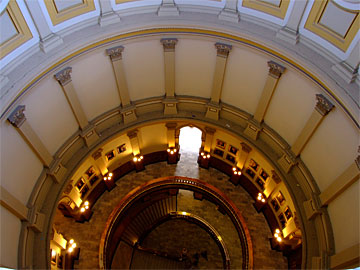 I could talk all day about how the interior of the capitol was regal, fancy, and generally shiny, but I probably couldn’t do this view justice with mere words. This is what you see looking down from the dome-level. (And if you look very closely, you can see the presidential portraits.)

After climbing exactly 99 steps, our group stepped onto the highest publicly-accessible portion of the capitol (at least, the highest at the time since the small upper dome area was being renovated) as well as one of the highest points in Denver. And yes, the view was breathtaking.

Yet even photos can’t do justice to… 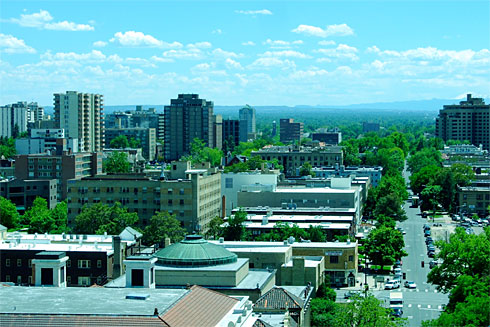 Yet even photos can’t do justice to the view from the top of the Colorado Capitol. The dome provides a 360 degree view of the city, and on that warm day in May the windows were open so the warm spring breeze kept the air in the dome sweet. Depending on which window you look out of, you could see Denver’s Cathedral Basilica on Colfax Avenue, the Civic Park Center to the West, or Sherman Street disappearing into the green foliage in the South. And through most of the windows, you could see the Rocky Mountains hugging the horizon in the distance.

The entire visit lasted a little over an hour, but the memories will last far longer.

Dude, the capitol tour was awesome! (I couldn’t resist.)

Photos from this trip are in the Exploring Colorado Capitol album. All photos in the Gallery can be used as desktop wallpapers because they are high resolution (1920×1440).

1 bit on The Free Colorado Capitol Dome Tour is Rad!