Have you ever listened to a mashup? Most likely you have, but didn’t realize it. A Mashup is a clever way to combine elements of two or more songs into one song, usually creating a completely new feel to the sound. Mashups have been getting more popular recently due to mashup podcasts, the most famous of which is undoubtedly MashupTown.com, which I highly recommend. Once you subscribe, free new mashups arrive at your podcast aggregator automatically. It’s easily one of my favorite podcasts. That’s not to say I’m not picky, though. Some mashups from MashupTown I could go my entire life never hearing again, but a few times a month they release a real gem (the kind of song you play over and over) and the makes it all worthwhile.

I love mashups like Norwegian Recycling’s How Six Songs Collide (which combines Jason Mraz, Howie Day, Five For Fighting, and more to weave a seamless unique ballad of sound), Galvanize the Empire (which is the most amazing Star Wars mashup your ears will ever receive), and Over the Confluence of Giants which combines Under the Influence of Giants, Steely Dan, Queen, David Bowie, and others to create a truly compelling atmosphere that makes me wonder if Marty McFly will pop out from around a corner any minute. And these are just some of the incredible mashups out there on the net.

The Accidental Creation of the First Wallpaper Mashup

Now that you know what a normal mashup is, (and I’ve officially distracted you for two hours while you delve into mashuptown’s website) I can explain what a Wallpaper Mashup is. A wallpaper mashup is the concept of mish-mashing data together in visual form instead of audio form. According to Google, I am the first person to use the term “wallpaper mashup” in a meaningful way, which is somewhat surprising to me. Nonetheless, let it be known that I was the first person to bring this idea to fruition. (No one really owns any concept per se. They mysteriously pop in to people’s heads all the time, but few act on such promptings.)

I stumbled upon this idea by accident when I was playing with Photoshop not long ago. (Ironic how our best discoveries occur when we are not looking.) For some reason, I had two desktop wallpapers (Snowy Sight & Harsh Peak) on separate layers and was playing with blending modes. Suddenly, a rather attractive image popped out at me when I selected a difference blend. In short, I had accidently created a seamless, somewhat pleasing blend of two wallpapers, but it wasn’t “complete”. I promptly saved the file and forgot about it for a few weeks, as is my habit when I plant the seed of a new creation.

When I returned to it a few days ago, I found to my delight that I still found it pleasing to the eye, though it still needed some tweaking. With wacky amounts of hue shifting, curves and other graphical mumbo-jumbo, I finally arrived at a delightfully and eccentrically-soothing final product. I call it Snowy Peak. 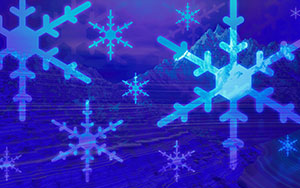 Snowy Peak comes in Aglow and Deep flavors for daytime and nighttime, or whenever you like. Above is the Aglow version. The Deep version often helps relax me at night, while the aglow version can help wake me up in the morning. It’s highly psychological. Perhaps I’m nuts, but it’s true for me.

p.s. Just for kicks, I’ve also added an especially bizarre version that I stumbled on after I created the Deep version. I call it Snowy Peak – Bizzaro.