Often, great adventure is just beyond what one is prepared to explore. One can go for years and miss a seemingly obvious entry-point into new territory. Of course, while this can be applied metaphorically to many areas of life, I discovered this quite literally when I decided to take a chance a few weeks ago and venture into a path I had never thought to look down before.

I have no regrets.

Quite predictably, my trip began with me wandering around the area on my bike. It was morning, and I needed some fresh air. I had passed this path dozens of times before, but this time I took the path. The path took me south past a small pile of short logs, but most of the path was rather nondescript as forests go. It was a fresh, brisk day, and the huge trees swayed in the breeze above me. 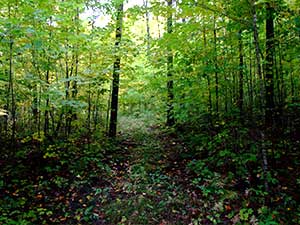 Decision at the Fork

At last I came to a fork in the path. I opted to continue south and could see a few fiery orange tree tops in the distance. I explored further south and soon came to a junction of four paths. East seemed like a good choice, so I went left. Some paths I did not go down and took photos of their mysterious paths instead. Continuing on, I began to pass more beautifully-colored maples and oaks.

After some time, I almost felt lost, but I knew I could find my way back. I began retracing my steps through the complex network of paths and found a new way back to the road. I’ve learned that whenever one is following a path from the opposite direction, one sees a completely different perspective. This is why so many people get lost.

One can imagine my relief when I saw the small pile of logs again. Then I realized how many thoughts were sloshing around my mind, and I sat on the logs.

I remained there for some time. I did not sleep or dream. I only relaxed and imagined solutions to my thoughts.

When I emerged from this meditation in the forest, I found everything seemed calmer, and the forest seemed clearer. I walked the remaining distance to the road and passed the most shriveled plant stalk I have ever seen. It was so pathetic that it deserved having a photo taken of it as well.

Photos from this trip are in Byteful Photos. All photos can be used as desktop wallpapers because they are high resolution (1920×1440).